Why Do Cats Run from the Litter Box After Pooping?

Boy, we cat lovers love our cats! Sometimes, to the point of an obsession! We watch their every move and want to understand just what they are doing and why. One of the things cat guardians seem perhaps overly curious about is why cats, after a bowel movement, sometimes leap from their litter box and dart away as if they are being chased. I have observed my own cat running from the litter box so quickly that he hadn’t quite finished “his business.” 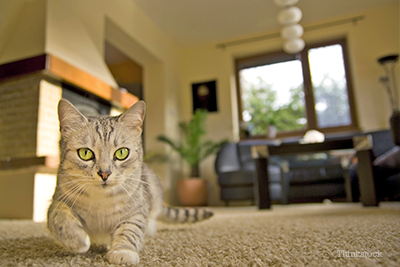 Internet speculation: why do cats poop and run?
I’ve recently come across an article by Amanda Bernocco, on HNGN, that speculates on this very issue. The posting says that “expert speculation” has finally revealed “a very scientific reason” why some cats might bolt out of their litter boxes after defecation (very exciting indeed). Bernocco goes on to say that cats are running because, in the wild, the smell of poop will attract predators.

Unfortunately, while the blog does name an “experienced pet writer (Lori Soard),” it’s unclear how the information was scientifically tested. No specific experts in veterinary medicine or animal behavior are mentioned, nor does it provide any references to scientific research on the matter. Therefore, while I find the speculation very interesting, I’d need to see more support before agreeing with this article's conclusion.

Medical reasons for a cat to poop and run
Bernocco’s article touches on the fact that some cats may run from their litter box after eliminating either urine or feces if they experience discomfort from the process. This important point I can confirm, and want to give special attention. Such discomfort could be caused by infections or inflammatory processes involving the urinary tract, colon or rectum. It could even be caused by constipation issues. However, once such medical conditions are ruled out (and they most certainly should be), any other ‘psychological’ reason for running away, after eliminating, seems not yet to be science, but rather pure conjecture (which can still be fun).

Click here for more about the diagnostic value of the litter box.

What do the experts say?
Consider how extremely variable the behavior of covering up feces is in the cat world. Some cats do and some cats don’t, even in the wild. According to Feline Behavior Guidelines from the American Association of Feline Practitioners’, “The cat may or may not turn to sniff or cover eliminations.” Newmanveterniary.com says, “Some cats cover feces and urine...some do not.”

Dr. Ilona Rodan, a veterinarian and feline specialty behavior consultant, is quoted in an animalplanet.com article as saying that, “she hadn't found evidence that cats run from their waste in the wild.” The same article touches on several additional theories for this behavior, put forward by both Rodon and Carole Wilbourn (cat therapist), including:

So, in essence, as one of my professors said when asked a question he couldn’t explain or answer, “Sometimes that happens.”

It’s understandable that we should all want, almost desperately, to understand what is going on inside the hearts and minds of our feline friends. Do they do what they do because they are happy, sad, anxious or excited? It would be nice to know, but for now I will just have to accept that the exact reason my cat flies out of the litter box, like a booster rocket, will just be one of many mysteries of innate cat-ness. I have found the best explanation to be “There he goes again!”

Isn’t it exciting that there are still so many things to learn about these magical and mysterious animals?