In the 1950s, American Shorthair breeders sought to incorporate the emerald eyes and beautiful silver coat of the Persian into their breed. The result was a bit of a surprise: a Persian with a short, manageable coat that eventually became the Exotic Shorthair. Because his coat requires far less work than that of the Persian (which is overly prone to matting and tangles), the Exotic was a hit with Persian lovers.

Today, the breed is one of the most popular cat breeds in America, second only to his cousin, the Persian. 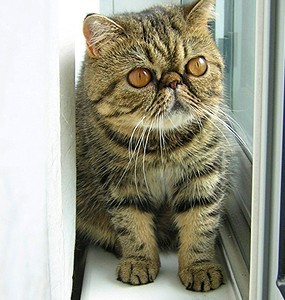 Here are some interesting facts about the highly-popular Exotic:

What has a round head, a flat face, a snub nose, and chubby cheeks, and is covered in a short coat of fuzz? An Exotic Shorthair!

A shorthaired version of the Persian, the Exotic is nearly identical to his cousin except for one thing: he is a bit livelier due to his American Shorthair heritage. The Exotic loves serene surroundings and gentle petting, and he’s more likely to lounge on the couch or in a beam of sunlight than wander around on the tops of your cabinets and furniture. The Exotic gets along well with children aslong as they’re gentle, and they also tend to bond well with other pets.

Playful in his own way, the Exotic is an affectionate cat who loves to sit in laps. He’s trainable and can learn some tricks, and he doesn’t mind spending some time alone as long as he gets  attention when his people are around.

When it comes to health, the Exotic is prone to various genetic problems:

Right for you?
The Exotic can be a great companion, but there are always a few things to consider when welcoming a new furry friend into your home: