History
Also known as the “Sacred Cat of Burma,” the Birman shouldn’t be confused with the Burmese, a completely different type and breed of cat. Birmanie is the French spelling of Burma, which means – you guessed it – the breed was cultivated in France.

How the Birman made it from Burma to France is unclear. There are several adventurous stories about the Birman – that two of them were a reward for defending a temple, that they were smuggled out of the country by a member of the Vanderbilt family, or that a couple of stolen kittens (or a pregnant female) were imported to France.

Almost wiped out during WWII, the Birman breed was rejuvenated in postwar France. The breed was recognized in 1965 in Britain and in 1966 in America and today, the Birman is one of the most popular cat breeds in America.

Cat Facts
Here are some fun facts about the Birman: 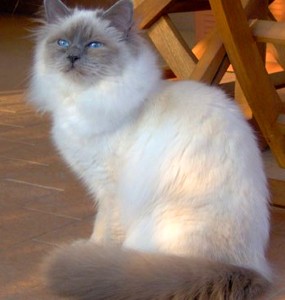 What are they like?
The Birman is a big mellow fellow! He loves to be around people, is adaptable to any type of living environment, and is only active when he feels like it. He gets along well with kids, other pets, and actually tends to prefer the companyof other animals instead of being an only child to a doting pet parent.

When it comes to playing, the Birman loves puzzle toys and games. It’s good to keep him occupied, but he’s not a high-maintenance cat, happy to get a head scratch here and a back scratch there. The Birman is fluffy, but believe it or not, those long coats don’t require much more than an occasional brush, making them very low maintenance when it comes to grooming.

The Birman is a very healthy breed of cat and is only prone to one breed-specific medical condition: hypertrophic cardiomyopathy, a form of heart disease.

Right for you?
Does a big, fluffy, yawning Birman sound like your kind of cat? Before you welcome one into your home as with all pets, there are a few things you should consider