In the 1960s, cat breeder Ann Baker of Riverside, California developed the Ragdoll. Josephine, an Angora-type cat that was possibly feral, was bred with a Seal Point Birman. One of the male kittens produced was then bred with a Burmese, and the Ragdoll was born.

But the story gets stranger. Before Josephine was used to create the Ragdoll, she was hit by a car. After receiving treatment for her injuries at the veterinary hospital at the University of California, Baker noticed that Josephine had become docile, went limp like a rag doll when picked up, and was largely immune to pain. According to Baker, Josephine’s genes had been altered in the lab throughgenetic experiments performed by the government, and this strange claim was just the first of many to come from Baker. 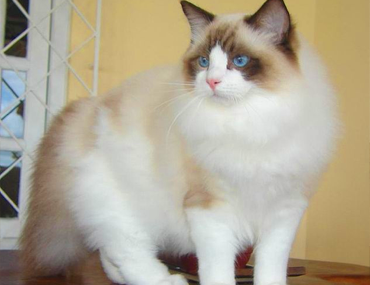 Whatever happened, today the Ragdoll is the sixth most popular cat breed in America today.

Cat Facts
Here are some interesting facts about the Ragdoll:

What are they like?
It’s true: when you pick up a Ragdoll, he’ll literally go limp in your arms!

But just because the Ragdoll is a relaxed, chilled out cat doesn’t mean that he doesn’t have a playful side. Especially when young, the Ragdoll can be a complete clown, and some Ragdolls never outgrow their inner kittens!

In reality, you’ll be hard-pressed to find a more tolerant, easygoing breed than the ragdoll. They get along with other cats, dogs, and kids as well as any pet. They’re friendly in an understated way, often gently greeting newcomers and familiar friends alike, and they’ll follow their people around the house with puppy-like curiosity.

The Ragdoll is a relatively healthy breed with just a few known health issues:

Right for you?
If a Ragdoll sounds like a furry bundle of joy, you’re right! But there are always a few things to consider when welcoming a new pet into your home: