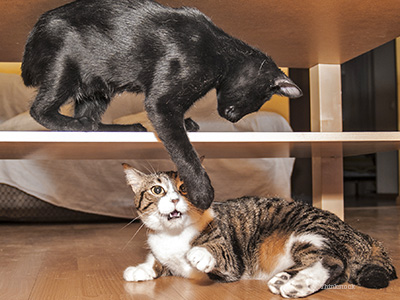 That was a close call—I felt the air whoosh against my retreating hand as the razor-clawed paw swiped past. I’d known Gabe since he was a kitten and he’d never behaved like this.

“I don’t know what’s wrong. He did the same thing to me last night when I tried to pick him up.”

As I allowed Gabe to chill for a few minutes, the story became clearer. Gabe was normally an indoor-only cat, but he’d managed to escape out a back door three nights ago. Gabe was waiting by the front door the next morning, appearing as though he’d had a rough night. His guardian could only find a couple of scrapes and a spot of missing fur; she decided a trip to the veterinarian wasn’t needed. The next day Gabe acted a little more sluggish, but his guardian chalked it up to not getting enough sleep during his outdoor adventure. Yesterday Gabe hadn’t eaten at all and only left the couch twice to use the litter box. Last night Gabe tried to bite his guardian when she tried to pick him up. By now I had a pretty good idea what was likely ailing Gabe – an abscess.

How can a tiny cat bite cause an abscess?
An abscess is basically a pocket of infection underneath the skin. Most abscesses are the result of puncture wounds that bury bacteria deep inside tissues and subsequently cause infection. Cat bites are notorious for causing severe abscesses for two main reasons:

In fact, cats are exceptional predators partly because of their abscess-causing prowess. If they fail to kill prey during the first attack, chances are good their quarry will succumb to infection enough for an easy catch in a few days. Brilliant.

Treating an abscess caused by a cat bite
Based on my conversation with Gabe’s guardian, his pain, and the fact that I’ve diagnosed hundreds of cat-bite abscesses, I administered a sedative and reviewed the likely minor surgery Gabe would need. A few minutes after Gabe dozed off I discovered the cause of his fever and fury—a swelling the size of a golf ball on his right hip. It was buried underneath his fur and required shaving to reveal the full extent of his injury. The skin surrounding the tiny bite wound was black, purple and hot to the touch. I sterilized the area and lanced the abscess to release over 50-ml of thick yellow pus.

Cats heal incredibly fast so I placed an indwelling rubber drain to allow the infection to channel out over the next several days. If not, the surgical incision would close quickly and we’d be seeing Gabe again for another abscess in a few days time. I flushed the wound a final time, administered an antibiotic injection, and prescribed antibiotics to be given at home. Unfortunately, that wasn’t the end of my worries for Gabe’s night on the town.

Testing for disease caused by a cat bite
Thankfully, Gabe was vaccinated against Feline Leukemia Virus (FeLV). Whenever a cat is bitten by an unknown feline, follow-up testing for FeLV and Feline Immunodeficiency Virus (FIV or “Feline AIDS virus”) is important. No vaccination is completely guaranteed to protect against disease and Gabe was at risk from his bite wound. Four months later, I’m happy to report Gabe’s tests for FeLV and FIV were negative.

The importance of treating cat bites quickly
The take home message is this:

If Gabe had begun antibiotics the morning after his fight, there’s a good chance surgery and a severe abscess could’ve been avoided. Follow-up testing for FeLV and FIV is necessary for any unknown cat bite. Ninja reflexes are also required to survive in veterinary medicine. Thanks for keeping me on my toes, Gabe.