Feline idiopathic cystitis (FIC) is also referred to as feline interstitial cystitis. It is one of several medical issues that fall under the umbrella term of feline lower urinary tract disease (FLUTD). FIC is a sterile inflammatory condition affecting the urinary bladder. This feline disease, in some ways, resembles the disorder referred to as interstitial cystitis in humans. 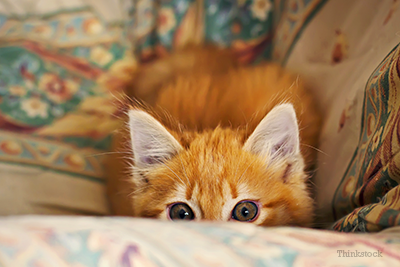 Cause of feline idiopathic cystitis
The exact cause(s) of FIC remain uncertain. One theory suggests that the combination of decreased water intake, along with increased permeability of the bladder wall (which allows irritants to penetrate the lining of the bladder) set the stage for FIC to develop. Some examples of FIC triggers include:

If the frequent attempts to void are producing no urine, it is important to consult with a veterinarian immediately. Some cats with inflammatory bladder disease produce crystals and other debris capable of forming an obstructive plug within the urethra (the narrow tube that leads from the bladder to the outside world). Other cats seems to display only functional obstruction, with pain and spasm, but no crystals or debris. A urethral obstruction causes an inability to pass urine and represents a true medical emergency. The longer and narrower urethral plumbing in male cats renders them more susceptible than females to an obstruction.

In addition to increased frequency of urination, symptoms associated with FIC often include:

Diagnosis of feline idiopathic cystitis
FIC is considered a “rule out diagnosis,” made after ruling out other diseases (infection, stones or tumor within the bladder) capable of causing similar symptoms. Doing so typically involves the following testing:

Treatment and prevention of feline idiopathic cystitis
The symptoms of FIC will resolve spontaneously (without any treatment) in most cats within five to seven days. However, given an affected cat’s level of discomfort, it can be very difficult to simply wait and watch. There are several treatment options to choose from when managing a kitty with FIC. Most experts agree that addressing environmental stressors and getting the cat to produce a dilute urine provide the most benefit. Note that antibiotics are not mentioned because FIC is a sterile (bacteria-free) inflammatory process. Listed below are the more commonly recommended treatments:

Diet change— There are several prescription diets on the market that have been developed for management of FIC. Most produce alteration of the urine pH. They may contain antioxidants and supplemental, omega-3 fatty acids. The diet change should be made gradually, and your veterinarian notified right away if the cat is unwilling to eat the new food.

Supplemental fluids added to the diet— The goal is to create a more dilute urine. This can be accomplished by feeding canned rather than dry food, adding liquids (water, broth, tuna water) to the food, and feeding multiple meals per day.

Amitriptyline— This is an antidepressant that benefits some cats with FIC.

Pheromones— Feline pheromones may reduce stress by impacting the limbic system and hypothalamus. These are available as sprays and diffusers.

Environmental modification— Changes that enrich the environment and reduce psychological stress for the affected kitty may provide benefit. Examples include:

Prognosis of feline idiopathic cystitis
FIC is considered a very treatable disease in most cats. It only becomes life threatening if urethral obstruction and the inability to urinate develop. Some cats experience only one FIC episode and never look back. For other cats with FIC, long-term, if not life-long, management is necessary.

Listed below are the more commonly recommended treatments: