Posts by:
Pet Health Network Contributors
What you need to know about a controversial procedure
Cat Surgery A-Z

Declawing cats is a very controversial issue! It’s a decision that each pet owner must make for themselves after talking with their cat's veterinarian.

At Pet Health Network, we agree with AAHA. It should be a last resort. However, if a cat is posing a threat to people or other pets and declawing is the only way for a cat to stay a member of a household, we support a pet parent's right to chose this option. It's certainly better than a cat landing in a shelter and risking euthanasia.

Most importantly, remember, a declawed cat can NEVER be let outside, ever. They are defenseless.

Here are some facts to help you make the decision.

Why do people declaw?

The most common reason to declaw a cat is to keep him from being destructive (scratching furniture, woodwork, doors, etc.), After finding a guilty cat sitting in front of shredded furniture, carpet, or drapes a few times, some pet owners might be tempted by this solution.

Similarly, if a cat is constantly getting in fights with other cats in the house or scratching people, declawing is seen as a fast solution, rather than correcting the behavior through training.

On some occasions, cat owners have medical reasons of their own that prompt de-clawing. For example, people with weak immune systems, such as the elderly or chronically ill, can’t be scratched. The bacteria on a cat scratch can be dangerous for them.

Do cats need their claws?
Yes, and for several reasons. One big reason is for protection. Not only do cats use claws to swipe at predators (including dogs in the neighborhood that might chase them) in self-defense, they are also used to climb trees and escape danger.

Also, claws are an important part of cat’s anatomy. Most mammals walk on the soles of their feet, but cats are different. They are “digitigrade,” which is another way of saying that they walk on their toes. Their entire bodies are engineered for toe-walking: their backs, shoulders, paw and leg joints, muscles, tendons, and ligaments are designed to distribute a cat’s weight across its toes.

Plus, cats use their claws for many things: balance, exercise, and stretching. If a cat is stiff, it sinks its claws into a surface to create an anchor from which to stretch its back, legs, and neck. This is the only way a cat can exercise many of its back, leg, and neck muscles. 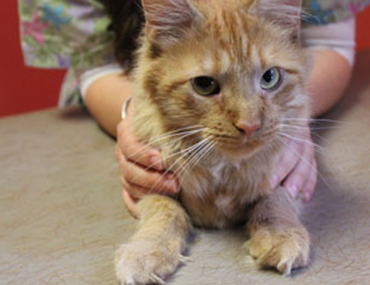 What happens when a cat is de-clawed?

The medical procedure involved in declawing a cat is called an onyectomy. It requires general anesthesia, which carries its own risks.

When a cat’s claws are removed, it is similar to cutting off the last knuckle at the end of each finger on a human hand. The claw isn’t just clipped. Actually, the whole bone is removed, including the ligaments and tendons. With five claws on each paw, feline declawing is similar to performing ten separate amputations.

While not every cat will experience any effects once healed from the surgery, there are some things to watch for:

For more questions on declawing, be sure to talk with your veterinarian. While it is an option for some, it is important to be educated on the procedure before deciding it is right for you and your furry friend.