Button swallows a linear foreign body
Button — a 1 year old, very handsome cat —would regularly find his way to trouble after his owners adopted him from the local shelter. He was very active: played daily with his toys and inserted himself into whatever project his humans were working on. 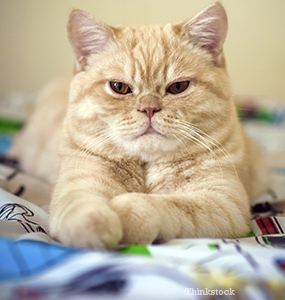 He also had a great appetite, so when he did not run to his food bowl at 6 am one morning his owner knew something was wrong. He was hiding behind the couch, drooling, gagging and stretching his neck. He was immediately rushed to the emergency clinic. Wisely, his owner had kept the contact information on a magnet on the kitchen fridge.

Button's emergency vet was concerned by his findings on physical exam. Button had a high rectal temperature. He was lethargic and painful on palpation of the belly. He would not let the doctor get near his mouth.

The next steps were blood work and abdominal radiographs. The blood work was normal overall except for an increased white blood cell count.

Radiographs of the belly showed a thin metallic object and gas in the intestines, as well as bunching of the intestines. The emergency vet asked if Button had been playing with anything abnormal. It turns out that he had been caught chewing on thread the owner was sewing with.

The vet now believed that Button had a "linear foreign body:" floss, ribbon, rope etc.  In Button’s case, the logical suspicion was that he swallowed thread. Remember the thin metallic object seen in the intestines?  This was most likely a sewing needle, which was attached to the end of the thread.

Why would anybody swallow tasteless thread, and a dangerous needle?  We don't know why, but cats are well known to do such things. And dogs are certainly not immune to it.

A major concern with a linear foreign body is that as the intestine moves around, doing its job at digesting, the string can cut into the intestine, causing leakage of its contents (a polite way to say poop). This can quickly turn into a deadly situation.

Button needed to go to surgery as soon as possible.

Linear foreign body surgery
A surgeon was called in on this lovely Sunday morning. This was not his first rodeo, and he knew that string can get wrapped around the tongue. Sure enough, there it was; a bright blue thread — caught around the base of the tongue and going down toward the stomach and intestine. The top part of the thread was cut off. The rest would be removed during belly surgery.

Without being too graphic, let's say that a foot-long portion of the intestine was purple and black, instead of a healthy pink. That part had to be removed. There was no leakage yet, but it seemed that it would have happened if Button’s owners had waited a minute longer.

After such an extensive surgery, Button stayed overnight in the hospital on IV fluids, antibiotics, and pain medications. He started to eat on his own Monday. His white blood cell count and all vitals returned to normal by Tuesday

Once Button was eating, comfortable, and alert he got the okay to go home:

Two weeks later, his stitches were removed.  His owners had done a great job at keeping the plastic cone (E. collar) on for two weeks, so the incision had healed nicely.

After another two weeks of strict confinement, Button was back to his old antics. He was allowed to slowly return to normal activity.

Button definitely had used up one of his nine lives. His owners had learned a costly lesson: never leave anything that looks like a linear foreign body unattended when there is a pet in the house.

Fortunately, Button’s owners did not procrastinate when they thought he was in trouble. The vets at the emergency clinic also acted promptly based on their findings.

Ultimately, Button did recover fully. Sadly, he will not learn anything from this medical and surgical adventure. But besides his health, he did get something out of this: new, safe toys to play with!