The Secret to Perfect Dog Training

When I graduated from veterinary school nearly 20 years ago, I knew a lot about veterinary medicine, but very little about finances. The idea of mismanaging funds so worried me that I had visions of being homeless. In order to learn some financial survival skills, I took a personal finance and an investment class designed for economics majors. Within the first week, I knew the investment class would provide me with perhaps the most important information of my life, because the instructor, a highly successful investor, promised to tell us the one secret in investing that would make everyone rich. For days he hinted that the secret was coming, and students judiciously came to class knowing that if they didn’t hear it firsthand, they would miss out on the most vital piece of information that would cross their ears during their entire undergraduate career. Then, in the third week of classes, the time had come.

The professor stated, “As promised, I’m going to tell you the secret of investing now.” He paused dramatically as silence overtook the room like darkness during a solar eclipse. And then he whispered the advice, “Buy low. Sell high.” The class uttered a collective groan. Hardly a secret, his advice was the obvious plan of action; but a plan that few investors actually follow.

The Solution to Most Pet Behavior Problems is Simple
It turns out that the solution to most behavior problems in pets is equally simple and IF you follow the plan, equally successful. All you need to know is one thing— that animals repeat behaviors that are reinforced. 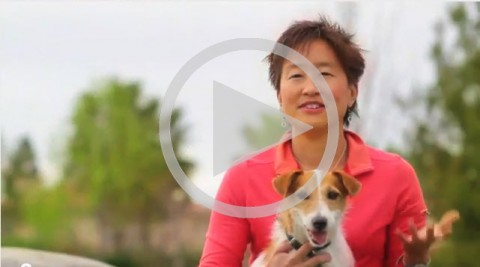 That means that if your puppy or adult pooch behaves badly, by say barking at you through the sliding glass door when he’s outside and you’re inside, jumping on you when you arrive home from work, or dragging you down the street on walks all you have to do is identify what’s rewarding the unwanted behavior, remove it, and instead reward a more appropriate behavior. For instance, you would avoid letting the Barking Bowser in when he’s barking and instead reward him only when he’s quiet. You’d stand quiet and stationary in order to remove your attention from the jumping greeter and then pet, praise or give treats to him when he sits (click here to see a video of this). For the persistent puller, you’d stop walking immediately before he is about to pull and only walk forward when he’s on a loose leash.

The approach for cats, horses and other animal is the same too. For instance, say you have a cat that meows at you to be fed or to get your attention. Simply remove your attention, in this case by ignoring him, and reward him with petting or treats when he’s quiet. Sounds really simple and it is, but the key is to consistently reward the quite behavior and avoid accidentally rewarding when the cat’s noisy and then to reward longer and longer periods of quiet until sitting quietly for long periods is his habit instead of meowing. Here’s an example using my cat Dante. In this video you can that at first I have to reward for just an instant of silence, but as soon as I can get that several times, I start rewarding for longer periods of quiet. Also once I get one reward for quiet, I try to give additional rewards while he’s still quiet and before he has a chance to meow again. It’s also handy that I taught Dante to sit quietly for treats before I started working on his problem behavior so that he already has a behavior that he knows earns him rewards. Otherwise I’d have to wait even longer to get the first bit of quiet that I could reward.

This Solution Works for All Animals
The beauty of this approach is that it doesn’t matter whether you’re talking about a pet or other animals. It’s how all animals learn. So you can apply the same principles to a housecat, hamster, parrot, or even a lion! Here’s an example of a lion with a history of what the trainers thought was over-motivation for food. When the lion came in for its meal it would roar and pace and ignore the trainer commands to practice the important exercises needed for regular husbandry and care such as touch a target, sit, or stand still. This is clear case of the trainers being inconsistent about rewarding what the want. In this training session depicted below, the trainers try a new strategy. Instead of confusing the lion by telling it what to do, the trainers are quiet and they just wait for the lion offer a behavior they want. In this case they are training the lion to lie calmly turn its head 90°. They start but just rewarding a slight head turn and systematically reward greater head turns. This highlights the importance of being quiet and focusing on rewarding the correct behavior at the right time instead of spewing words, which often just act as noise and confuse the animal. Because the trainers can just focus on rewarding the behavior they want and make sure they avoid rewarding the unwanted behaviors—pacing, roaring, fidgeting—the lion learns quickly the head turn two sessions.

Now You Try
The basic approach is truly this simple. And as with that time-tested investment rule, if you follow it, you are destined for success. Now it’s just a matter of approaching all problems systematically by thinking about the behavior you’d rather have and how the unwanted behavior was unintentionally reinforced. Once you do this regularly your understanding and relationship with your pet will be behaviorally rich.

Here are some videos and blogs to give you some ideas: