Background
In the 1800s, some European countries wanted to develop their own animals that could represent a sense of pride and nationalism. Belgium’s source of pride was the Belgian Sheepdog. He is also known as the Groenendael or Chien de Berger Beige.

In 1908, the dogs were imported to New York where they were used as police dogs. Belgian Sheepdogs were also used during World War I as message carriers, ambulance dogs, and for pulling machine guns.

The Belgian Sheepdog was recognized by the American Kennel Club in 1912. 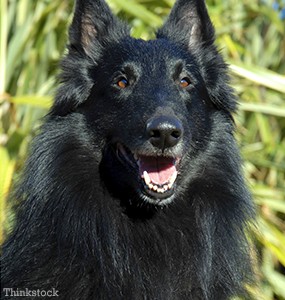 What’s the Belgian Sheepdog like?
The Belgian Sheepdog is alert, playful, and tough. He can be very territorial and is protective of his family. He needs a lot of exercise to fulfill his activity needs but isn’t picky about how he gets it: a run, hike, or bike ride would all be lots of fun for him. He is very cooperative with children, especially if he’s raised with them; however, be careful around younger children because he may chase or nip at them while trying to be playful.

Even though the Belgian Sheepdog is highly intelligent, he should still be trained the day you bring him home. Always use positive reinforcement with a firm yet consistent tone.

You should brush your Belgian Sheepdog’s coat about once a week to remove dead hair, also run a comb through every once in a while to prevent any mats or tangles. You should repeat this process a little more frequently in the shedding seasons.

Health
The Belgian Sheepdog is generally healthy, but notable concerns include the following:

Epilepsy is a condition of repetitive seizures. Some cases can be hereditary.

Progressive retinal atrophy is an eye condition that essentially worsens over time and could lead to a loss of vision.

Hip Dysplasia is one of the most common diseases seen in dogs, with larger breeds being the most affected. It is ultimately a malfunction of the hip joints which can then deteriorate over time resulting in a loss of function in those joints.

Hypothyroidism is a disease caused by an increase in metabolism as a result of too much thyroxine.