The Bernese mountain dog, which was originally called the “Durrbachhund,” was later re-named after the Canton of Bern. The Bernese comes from Switzerland where he was used to pull carts, drive cattle and act as the front line of defense for farmers.

Breed standards were first written in 1907 when several breeders from the Burgdorf region formed the Schweizerische Durrbach-Klub. The club had 107 members by 1910. 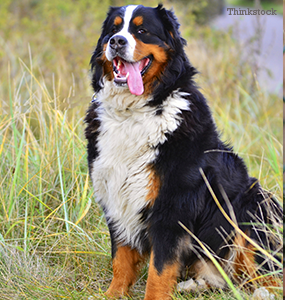 Finding the right breeder is an essential first step to a well adjusted Bernese mountain dog. You should look for a breeder who raises his dogs indoors so that they have the opportunity to observe and explore household events.

As a puppy the Bernese will require patience. He won’t reach adulthood for 3 or 4 years and that means you’ll either need to know how to handle an immature dog, or adopt him when he’s a little older. If you have children it’s recommended that you do adopt an adult Bernese. Their weight, even as puppies, is enough to knock a child over, and they’re likely to be more rambunctious at a younger age.

A socialized adult Bernese will be well behaved and calm. He’ll do well in the house, be great with kids, and require only a medium amount of exercise.

The Bernese can be shy and overly cautious if not provided with a healthy dose of interaction. He can also be ultra sensitive to loud noises. Make sure he’s exposed to new noises often and that you’re always there to encourage and support him.

The Bernese is a powerful chewer and although they don’t require an excessive exercise regime they should be active for at least 30 minutes a day to prevent destructive behavior. You should also provide them with sturdy toys.

The Bernese has a thick coat and sheds often.

The Bernese will tolerate other pets but is better behaved with animals the he’s knows since puppyhood.

The Bernese has a higher rate of cancer than other breeds, and a shorter life expectancy as well.