The bloodhound can be traced to Saint-Hubert who lived in a Belgium monastery around 1000 AD.  His origins are likely rooted in France where many dogs were bred. William the conqueror brought bloodhounds with him when he conquered England in 1066.

By the 1400’s the bloodhound line had been well established and appears in English writing of that time. He was the first dog to hunt by scent although he usually didn’t assist with the kill.

Prior to the bloodhound there had been few records kept on canine bloodlines. England was the first to establish such records and to popularize dog shows. It was this change in thinking that probably saved the bloodhound from extinction and caused Queen Victoria herself to take a special interest in the dog.This history of nobility proved to be the catalyst which forged the bloodhound name. Some mistakenly took the name to mean that the bloodhound hunts in order to kill, which couldn’t be further from reality. 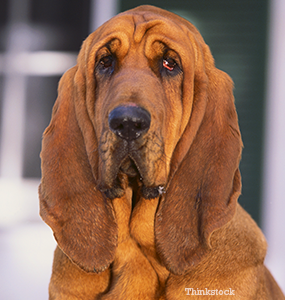 The bloodhound is far from the lazy porch dog so often depicted. He can track a man for miles and has done so on many occasions. He’ll be a very active puppy and might chew on everything or anything. A crate is an important purchase when you have a bloodhound. A fenced back yard might also prove a necessity. The bloodhound will follow his powerful nose wherever it might take him: that includes the street or many miles away from home. He can’t backtrack so keep him close. He’s also excellent at digging to escape so build your fence deep.

The bloodhound is gentle, making him great for kids and families. He can be determined at times, making training difficult, and will respond better to kind words than a harsh tone.

The bloodhound loves food, and that might be the best way to train him, once he knows what the reward is, he’s more likely to look forward to sessions.

Good leash manners are an essential part of bloodhound training and he should be on his leash every time you go out.

In bloodhounds, as with all pets there are certain conditions that might affect them more frequently: