In 1800’s England and Scotland, herding was a way of life. For every shepherd there was a sheepdog and each sheepdog owner boasted that his dog was best. In 1873 the first sheepdog trails were held and most of the dogs there proved to be noisy and aggressive. The one that stood apart was named “Old Hemp.” Hemp was quiet, intelligent and herded through sheer presence and a long intimidating stare. Hemp became the father of modern day border collies and the standard to which working collies aspire to even today.

Queen Victoria is considered to be responsible for the split between the collie and Border collie. She was an avid enthusiast of the breed. Despite this early divergence the name “Border collie,” didn’t appear until 1915 when the breed was named after the border lands from which he originated.

The Border collie spent years developing his reputation as a working class dog. He ran upwards of fifty miles per day and was possibly the most intelligent dog in the world. Breed standards had developed along these lines with very little emphasis on appearance.

When the Border collie was recognized by the AKC in 1995 it upset many breed fanciers who weren’t interested in showing. While some have grown to accept the Border collie as a show dog, others will always see him as a working dog and nothing else. 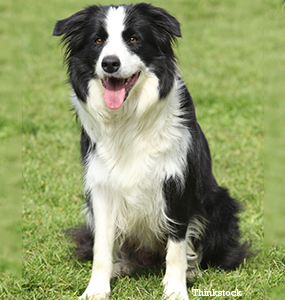 The Border collie is an incredibly intelligent dog. He can potentially learn over 1000 commands and can act independently. He has a work ethic unrivaled by any other breed and what’s more he enjoys his work. Along with this ethic comes a level of energy that might be too much for some pet owners and even too much for some turbo charged kids.

Making a border collie happy will require an intense amount of exercise, a run around the yard won’t suffice. It’s also important that the Border collie have a job to perform, although he’s certainly capable of finding his own work.

The Border collie likes to be around other pets but be assured he’ll try to herd them. This might frustrate the family cat or it might not, it depends on the cat.

The Border collie’s behaviors might be considered compulsive at times. He’ll chase just about anything including his own shadow and might wait by the laundry machine for it to finish or by the doorbell for it ring. He stares frequently which some might consider unsettling and is somewhat standoffish with strangers.

He’s a loving family dog and sheds only seasonally.

The Border collie can often live as long as 18 years or more. The most common causes of death are old age, cancer and cerebral vascular afflictions. There are several other conditions seen more often in the Border collie: