As the name suggests Boston Terriers were first bred in Boston Massachusetts. The father of the breed was named Hooper’s Judge, and was purchased in 1870 by Robert C. Hooper. He was imported from oversees and shared blood ties with both bulldogs and terriers. He was then bred with at least one French bulldog resulting in the Boston terrier, which at the time had the name of Round Head. In 1891, when the Boston Terrier Club of America was organized, the breed name was changed. Boston was the natural choice and thus the name selected. 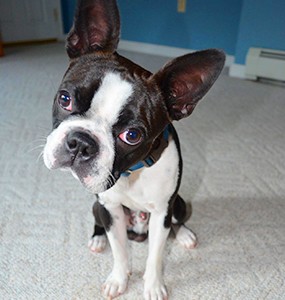 Despite the reputation, Boston terriers are not overly energetic nor are they aggressive. In fact they’re one of the most docile breeds you can find. Although that’s not to say they aren’t capable of great agility and speed. They’re an incredibly flexible breed, and would do just as well on a farm as they would in a small apartment. Often, they’re called the American Gentlemen. This is both because they are commonly black and white in color, and also because they have a calm and polite demeanor. They’re protective of their owners and eager to please. They’re quiet dogs, rarely bark and with the right owner train easily.

Boston Terriers are great with kids and animals alike. They just want to be a part of the family, and they have in them limitless affection. They’re more understanding of your schedule than other breeds, but would still prefer you’re around as frequently as possible. That said, with proper exercise a Boston terrier isn’t likely to destroy your house because you leave it alone for a few hours.

Where health is concerned, Boston’s are most susceptible to: