Background
¡Yo quiero un Chihuahua! (I want a Chihuahua!)

Perhaps best known for his stint as the Taco Bell® front man, the Chihuahua has a long history. The Chihuahua is named for the state in Mexico from which he originated, but he likely descended from the Techichi, a companion prized by the ancient Toltec civilization (which predated the Aztecs). And while no Techichi remains from prior to the 9th century have yet been found, many historians think that the Chihuahua’s single ancestor descended from pariah dogs that roamed around during Mayan times dating back to 2000 B.C.!

At one time, the Chihuahua was a bit bigger than the modern version we know and love today. However, some think that interbreeding with the Chinese Crested has made it smaller. And small the Chihuahua is: as one of the most popular breeds in America, the Chihuahua is the smallest existing dog breed. 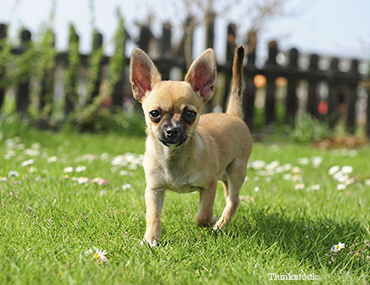 Sizing up (or down)
The Chihuahua is tiny! Here are some common physical characteristics of the Chihuahua:

What are they like?
You may see them peering out of purses, especially designer purses of the likes of Paris Hilton. But don’t be fooled: the Chihuahua is hardly a lapdog!

The Chihuahua is tenacious, like a terrier or a Miniature Dachshund, and though his bark is bigger than his bite, he rarely backs down from anything. Alert and full of attitude, Chihuahuas aren’t shy about what they want. That doesn’t mean he’s not fun to be around, however – the Chihuahua is an extremely devoted little pooch, often bonding with one particular person in a family above all others.

Besides being one of the cutest dog breeds, the Chihuahua is a smart dog that can be trained with some work. The breed does very well in apartments, is highly portable, and does well with older children.

Although generally healthy, Chihuahuas are prone to a variety of genetic health problems, including:

Right for you?
The Chihuahua can be a charge of energy for the right person or family, but there are always things to consider when thinking about welcoming a new dog into your home: