Background
The name is literal: German Shepherd Dogs were born and bred to herd and protect sheep in nineteenth century Germany. Before 1899, many towns in Germany had their own version of a German Shepherd Dog. Eventually, a group of breeders led by Captain Max von Stephanitz created the current German Shepherd breed by combining dogs from several different towns.

Today, German Shepherds are a favorite breed – in fact, they are the second most popular breed in America. They’ve been featured in movies like Rin-Tin-Tin and because of their ability to learn quickly, and follow instructions, along with their innate loyalty and protective instincts, they are favored among police and military organizations. 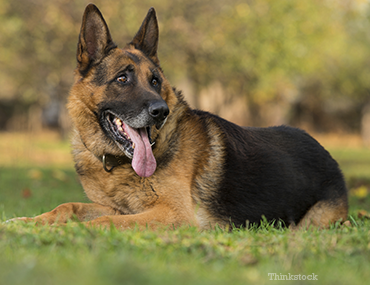 What are they like?
Like a lot of dogs that were originally used for herding livestock, German Shepherds are alert, active, and athletic.  They’re very durable and are fantastic outdoor dogs, and this is one reason they’re popular: they’re great for people who love to get outside and hike, run, or swim! German Shepherds are also confident dogs –fearless but not hostile, they hold their ground and are considered reliable guard dogs.

German Shepherds bond well with others, especially the leader of the household, thought they are a bit shy around strangers and it can take some time for them to warm up.

They’re very smart dogs as well, known for both loyalty and being highly trainable. Given the right amount of training and attention, they can be great family dogs!

Right for you?
Before you take home that adorable, fuzzy little German Shepherd puppy, it’s important to think hard about what you’re getting into. Here are some considerations to make:

German Shepherds can be great, loyal dogs. When trained and disciplined well, they can make excellent family dogs, especially for active folks.