The first evidence of the Greyhound was discovered in Egypt. Greyhound carvings found in Egyptian tombs dated back to 2900 and 2751 B.C -- they illustrated the dogs attacking deer and mountain goats. The first complete description of the breed came from Ovid, a Roman source, who lived from 43 B.C. to 17 A.D.

It was during the 1500s that Greyhounds arrived in America. They were brought in by Spanish explorers to hunt, guard, intimidate and punish Spanish enemies (meaning the native Americans). George Washington had his massive Greyhound, named Azor, with him at all times during the American Revolution.

The Greyhound was recognized by the American Kennel Club in 1885. 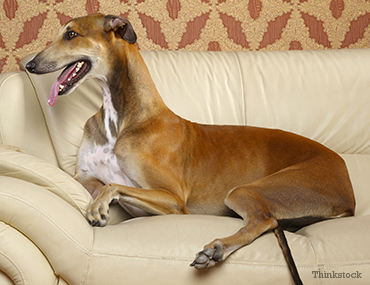 The Greyhound is gentle, quiet, and loyal to his family. Greyhounds are extremely loving and enjoy being in the company of their humans. They also get along well with children, as long as those children treat them respectfully. Many owners describe their Greyhound as the “45 mile per hour coach potato.” This is because they’re fast when they need to be but often lethargic in the house.

Greyhounds can experience separation anxiety if their owners have to leave them alone for a long period of time so a pet sitter is recommended.

They’re easily adaptable to new living conditions. They aren’t especially vocal and rarely bark which makes them suitable for suburban environments or city apartments. They have a calm temperament.

Greyhounds should be kept on a leash when they’re outside unless safely guarded in an enclosed area. They’re a flight risk because of their speed and because they love to chase small animals. You should start training your Greyhound the day you bring him home and stress the commands that will call him back to you.

The Greyhound's coat is very simple to groom; brush it weekly with a rubber brush or hound mitt to remove dead hair and keep the coat shiny.

The Greyhound is generally a healthy breed but watch for any of the following: