Japanese Chins are more likely native to China than Japan but they’re called Japanese because it was in Japan where they were prized above all else. The first people to breed these dogs were Buddhist Monks along the Silk Road. Eventually they were gifted to nobility at imperial palaces. In Japan, Chins were not considered dogs at all but an entirely superior species. The Japanese refined the breed and are credited with giving them their distinct look.

In the 1600s Japan closed itself off from the rest of the world, concerned that their people and culture were being tainted by the influence of outsiders. As a result the Chin remained a closely guarded secret. It was only during the mid-19th century that Matthew Perry was able to negotiate with Japan and open trade routes.  The first Chins to enter America were given as gifts to Perry and then to President Franklin Pierce. After trading with Japan resumed more and more Chins steadily entered the U.S.

After being released from Japan, the Chin found himself once again popular among nobility. This time making waves in England and Europe. The American Kennel Club recognized the Japanese Chin in 1888. 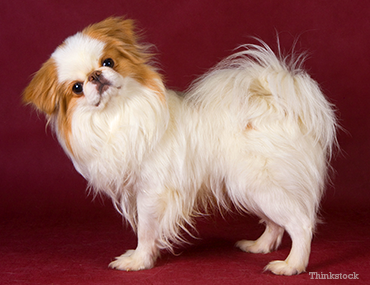 You’re going to find it impossible not to have fun with the Chin. They’re upbeat, clever, witty, and born entertainers. The Chin is famous for the “Chin spin:” A particularly agile maneuver where the Chin stands on her back legs and dances. If you enjoy the spin make sure to praise your Chin for it; she’ll only put on shows for an enthusiastic audience.

The Chin has always been a family dog and loves people; she needs plenty of attention and playtime. As a social dog she won’t want to be left alone for long stretches of time. Although extremely loving in the presence of family, the Chin might be reserved or reluctant around strangers. Socialize you Chin early and often.

The Chin is a smart dog and as such can be a challenge to train. She will be easily bored by repetitive tasks so keep your sessions quick and entertaining. Always be positive with the Chin, never scold her. She has an excellent memory and will make you pay for any outbursts. The best strategy is to let her think she’s running the show.

The Chin is fast and a supremely impressive jumper. She can easily get to food high up on a counter or jump a fence in the backyard. Make sure to take this under consideration before turning your back on a Chin.

Despite her impressive coat the chin actually has minimal grooming needs. Brush her once a week to remove tangles.

The Chin is generally healthy with few hereditary conditions; those that might affect the Chin include the following: