Lhasa Apsos originated in the cold mountains of Tibet over 4000 years ago. They are one of the oldest canine breeds, and recent DNA testing shows them to be closely linked with the ancestral wolf. In all likelihood they share ancestry with the Tibetan Spaniel and the Tibetan Terrier. In fact the Lhasa Apso and Tibetan Terrier were once considered to be the same breed.

Lhasa Apsos were used by Tibetan Monks to guard the holy temples. They were actually the second line of defense after the Tibetan Mastiffs who watched over the temple entrances. Lhasas were much more than guard dogs. It was believed that, after dying, Dalai Lama’s souls could actually enter the dog for a short period of time. For this reason Lhasa Apsos were never sold and rarely given to outsiders.

It wasn’t until 1933 that the 13th Dalai Lama gifted a pair of Lhasa Apsos to his friend Suydam Cutting who was visiting Tibet. It was Cutting who brought the Lhasa back to America and started breeding them. The Lhasa became the first Tibetan breed registered by the American Kennel Club in 1935.

Today, there are concerns that the American breed is starting to branch too far out from the original Tibetan Lhasa. 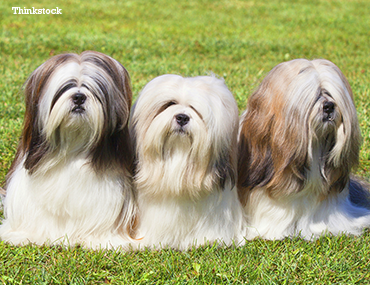 The Lhasa’s history of nobility and holiness hasn’t completely been forgotten. It’s easy to put these puppies on a pedestal and give in to every demand they have –resist! A well behaved adult Lhasa starts with a well trained young Lhasa. It’s important that you show Lhasas you are the pack master, and the leader of the house. If they feel, even occasionally, that they’re in control Lhasas will take full advantage. They’ll bark loudly and often, climb on whatever they want, and suffer from separation anxiety whenever you leave the house.

Early socialization is also vital to the breed’s wellbeing. Without it they might be aggressive towards other animals or strangers. They're likely to be suspicious of strangers anyway but should be able to tolerate them on a regular basis.

So long as you can avoid these pitfalls Lhasa Apsos will be a well behaved and comical addition to the family. They love children and look forward to daily walks. The Lhasa is no stranger to being a companion dog and is among the best company you could hope to have.

If you’re getting your Lhasa Apso from a breeder you should ask if his dogs have regular eye exams. Retinal problems have been noted in the Lhapsa Apso.

Other potential conditions should also be taken into consideration: