The Malamute is a descendant of the Spitz, and can be credited to the Inuit people native to Alaska. These early Eskimos relied on Malamutes for hunting, pulling sleds and carrying supplies. The Malamute was especially adept at hunting seals and bears.  The native Inuit people, also known as Mahlemut, were very close with their dogs. Life would have been difficult if not impossible without them. Although the dogs weren’t pampered they were treated as part of the family.

In 1896 gold was discovered in Alaska which caused a sudden influx of outsiders. The new arrivals needed Malamute dogs to pull sleds, and the demand vastly outnumbered the supply. Malamutes became extremely expensive and were even crossbreed with outside breeds in hopes of boosting their numbers.  The crossbreeding seems to have had little, if any, long term effect on Malamute DNA. Recent testing confirms that the Malamute is one of the oldest breeds in existence.

The Malamute population was devastated during World War II when they were used as service dogs, but it has bounced back in years since.

The American Kennel Club recognized the breed in 1935. 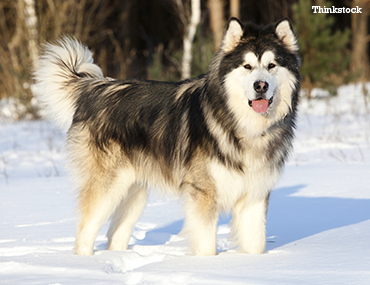 The Malamute is strong willed and independent. Instincts he picked up while learning to survive harsh Alaskan conditions. He can be difficult to train, as often times he thinks his way is much better than yours. He can also be destructive, which can be avoided, so long as you provide him with proper exercise.

Exercise is a must with this breed and it must be everyday without exception. The Malamute is well suited to pull sleds or carts and either should sufficiently satisfy his needs.

The Malamute is an excellent family dog. He’s friendly, loves his people, and rarely knocks anything over in the house. He’s curious and always ready to explore. He’s also generally quiet, although occasionally he will bark as if he’s speaking to you.

The Malamute would not be suggested as a guard dog, he would probably greet intruders politely.

The Malamute likes strangers but family pets are less likely to receive a warm welcome from him. Malamute owners often find their pets will chase any small animal. He might look the other way if he has known the animal since birth but it’s not a guarantee.

The Malamute coat is thick and designed for very low temperatures. It should be brushed a few times a week. He sheds all year long.

The Malamute is usually healthy but as with all breeds there are several conditions to note: