Background
The tiny ball of fluff that we know as a Pomeranian used to be a lot bigger!

Originally used as sheep herders along the coast of the Baltic Sea in Pomerania – present day Germany and Poland – the Pomeranian has shrunk over the years.

The decrease in size came because of selective breeding, influenced mostly by the popularity of a single Pomeranian named “Windsor’s Marco” who was a tiny 12 pounds and happened to be the sidekick of Queen Victoria. When she displayed him in 1891, he immediately became a standard that all breeders strove to meet. The Pomeranian – known up until that time as the “Spitz dog,” was gradually bred smaller and smaller.

The first Pomeranian specialty show was held in the United States at the Waldorf Astoria Hotel in 1911. The breed continues to be popular today, ranking as the fifteenth most popular dog breed in America. 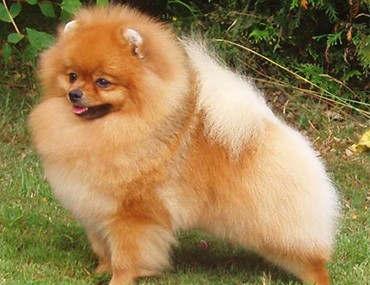 Sizing Up
Pomeranians are tiny! Here are some common physical traits of the Pomeranian:

What are they like?
We’ll put it this way: if a Pomeranian’s around, you’ll know about it.

A cocky, animated little dog disguised in a ball of thick fluff, the Pomeranian is very intelligent and loves to please. He’s a highly-trainable little bugger that loves to perform tricks and is often very curious about the world around him.

Because the Pomeranian is so small, he’s very portable and does great in apartment or condo settings. He is often able to get enough exercise in the living spaces through which he roams, so he won’t take a lot of your time up for exercise. A 15-20 minute walk will do the trick.

With the right training, the Pomeranian can be a good family dog (though it is best if they are around older children). He’s a great watchdog and can be a fearless little guardian of the home. Also, even with all that thick fur, the Pomeranian is pretty easy to groom because he’s so small. Brushing a few times per week should keep a Pomeranian comfortable and happy.

Generally a pretty healthy breed, the Pomeranian is prone to a few genetic medical conditions:

Right for you?
Endlessly entertaining, the Pomeranian can be a lot of fun to have around. However, as with all pets, there are some things to think about before welcoming a Pomeranian into your family:

Trained and socialized the right way, a Pomeranian can be a great addition to many households.