The Rhodesian ridgeback is also known as the “African lion hound,” which gives us a fair amount of insight into his origins.

In the early 18th century, when Europeans started trading with the Khoikhoi people of Africa, they came across a type of dog with a ridge along his spine. This dog was noted as being ugly, but also an excellent guard dog. When Europeans decided to breed their own dogs with this African type they created the forbearers of the Rhodesian ridgeback.

The Rhodesian ridgeback was a prized hunting dog, capable of tracking and pinning lions, all the while avoiding crocodiles and snakes. These traits made the ridgeback very popular in Zimbabwe where he was initially bred.

The Rhodesian ridgeback was recognized by the American Kennel Club in 1955. 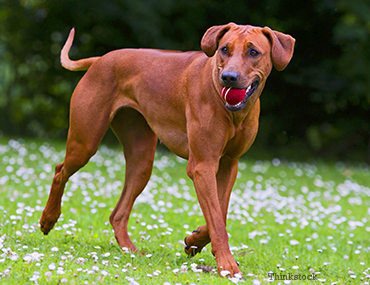 The ridgeback is an excellent hunter, and independent thinker, a ferocious guard dog, and a kind family dog.

The ridgeback wouldn’t be a good starter dog as he requires that you walk a fine line of discipline. He needs structure throughout his training but will be crushed by any disapproval or harsh words. He requires patience and consistency. He’s intelligent and won’t necessarily view people as “master.”

The Rhodesian ridgeback is often standoffish around strangers. You’ll need to socialize him early to keep him from becoming aggressive and territorial. He might play too rough for children and will only tolerate cats if he’s known them from birth.

Sometimes ridgebacks are just going to do what they want to do. They’re intelligent and will remember everything you let them get away with. Just remember to be consistent, even a simply slip up could lead to a sudden behavioral issue.

The ridgeback can be aggressive towards dogs of the same sex and should be leashed in public.

The ridgeback might be affected by thyroid issues. They could also be vulnerable to dermoid sinus or hip dysplasia.