Why Do Pooches Eat Poop? 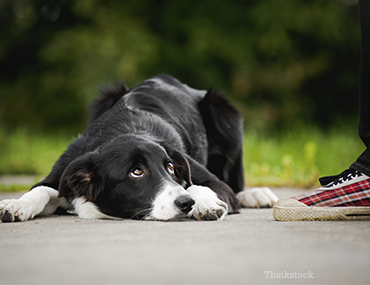 How many of you dog owners have been a victim of this scenario? Your dog enters the room and sees you on the other side. He tosses his ears back, puts on a smile, wiggles his way over and gives you a big smooch. For an instant you’re overjoyed but then you realize, “That’s not normal doggie breath. Yuk. It smells like poop!”

If this has happened to you, rest assured, you’re not alone. According to a study presented at the Dr. Benjamin Hart at the 2012 ACVB/AVSAB Animal Behavior Symposium, 16% of dogs are serious stool eaters (a.k.a. copraphagia), meaning they’ve been seen eating dog poop at least 5 times. For those of you who have lived with a cat and dog together, I’m sure the situation seems even worse—it seems like a majority of dogs will eat kitty poop eventually if they have access.

You might think that such a foul habit points something abnormal such as a nutritional deficiency or that it means Fido’s not getting enough to eat, but according to Hart, that’s not true. In their survey-based study of 1548 dogs where the researchers compared poop eaters with non-poop eaters, they found that diet was not an important factor. However the did find that the size of the household was.

“The more dogs you have the more likely your dog will eat poop,” says Hart. “19% of poop eaters were in single dog homes whereas 24% lived with two dogs and 30% lived in a three-dog household.”

A second study survey looking at super poop eaters only—dogs who had been seen eating poop over 10 times, shed more light on why this trend would be so. It’s because they’re not eating their own poop that much. “Eighty five percent of poop-eaters ate the feces of other dogs,” states Hart. Meaning that the more dogs, the more access to feces from other Fidos. Yes, it just gets grosser.

You might wonder how poop-eating could become such a common pastime among dogs. It all began over 10,000 years ago when dogs started hanging out near humans so that they could scavenge off our trash. This tendency to scavenge can be seen in the present day "wild" model of the domestic dog—the village dog. While dogs in the U.S. experience the luxury of a cozy home, free meals, and regular veterinary check-ups, three quarters of the world’s dogs are feral dogs, most of whom have chosen to live in villages near people. These mottly mutts make their living by preying on stolen tidbits, human leftovers, and feces of all kinds. Those tame enough to hang out close to humans and human dumpsites and indiscriminate enough to eat anything with nutritive value survive the best.

Many of our coddled domestic dogs retain a strong desire to scavenge. They raid trashcans and left out lunch bags. And interestingly enough, Hart found that the best predictors of poop eating was weather or not the dog was a greedy eater. 52% of the stool eaters in his study stole food off tables. Only 27% of non-poop eaters showed this lack of impulse control.

So if you have a greedy eater will he become a feces foodie? It depends on his access to the morsels, the level of other interesting activities, and personal preference. Luckily for most owners, like humans who never develop a taste for snails, many dogs never develop a taste for poop. And even though dogs in Hart’s study were greedy, they were still picky enough to go primarily for the fresh stuff. 75% of dogs at poop that had been around for only 24 hours and 92% only ate poop within 1-2 days.

Now for the big question: what should you do if your dog likes to feast on feces? Well, don’t bother with the commercial products. Hart’s survey found that of the 12 commercial anti-copraphagia food additives on the market—For-Bid, Nasty-habit, and Potty Mouth to name a few—none worked in more than 2% of dogs and many didn’t work at all. On the other hand, what could possibly taste worse than poop?  Yet, lacing with chili pepper didn’t work either. Nor did using an electronic collar, yelling “leave it!” or trying punishment-based techniques that people tend to use. That’s most likely because the dog still has a desire and may just learn to avoid performing this nasty habit in front of you.

A more successful, but inconvenient, solution is to just deny access to the delicacy by cleaning it up ASAP. Also, instead of reactively punishing Fido, proactively call him to you before or as soon as you see him heading towards the stinky delicacy. Then reward him for coming when called and staying where you want while you go out and scoop the waste.