The Dangers of Esophageal Foreign Bodies in Dogs

Do you have a small dog that likes to wolf down treats or rawhides really quickly? If so, this blog is a must read!

Your dog’s throat
The esophagus is a thin sheet of muscle located within the thorax that connects the mouth with the stomach and aids in pushing food and water down into the stomach. Once in a while, if a dog (or rarely, a cat) swallows something too large – or too sharp – for it to pass out of the esophagus, it can become an esophageal foreign body. Esophageal foreign bodies typically get stuck in two locations in the esophagus: near the base of the heart or in the back (i.e., caudal) part near the diaphragm.

What might cause an esophageal foreign body in my dogs throat?

Common causes for esophageal foreign bodies include the following treats or objects: 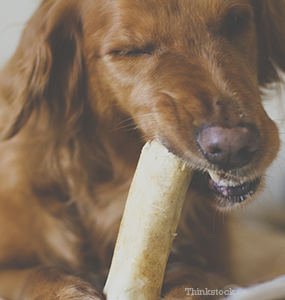 Symptoms of an esophageal foreign body include the following: 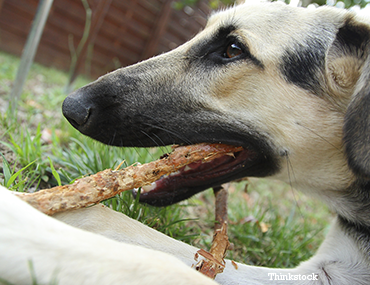 Diagnosing and treating an esophageal foreign antibody
The diagnosis of an esophageal foreign body is typically made on chest x-rays or even a barium swallow (which is when a large amount of dye is given through the mouth to highlight the esophagus).  Thankfully, with rapid diagnosis the prognosis is excellent with treatment. Treatment includes anesthesia and endoscopy -- a small camera inserted into the mouth and esophagus. With endoscopy, the foreign body is often pulled out of the mouth or pushed directly into the stomach (where it can slowly digest or be removed with surgery). Surgery of the esophagus is not typically done due to poor healing of the esophagus and due to the invasiveness of the surgery (it requires the chest cavity to be opened up). Once the foreign body is removed, at home treatment includes antacids, stomach protectants, and canned food. In some circumstances, esophageal strictures can develop, requiring future endoscopy to balloon dilate the stricture.

Esophageal foreign bodies are an emergency that must be rapidly diagnosed and treated. Don’t miss the subtle nature of this life-threatening problem!