Overview
Heart disease is as scary in dogs as it is in humans. Dilated cardiomyopathy (DCM) is a serious condition of the heart that occurs when the heart muscle becomes diseased and weak. The heart is a muscular pump that pushes blood around the entire body. In the normal dog, it beats approximately 180,000 times a day! A muscle working that hard needs to be in shape, with good muscle tone, to do its job effectively. When DCM strikes it renders the heart muscle weak and flabby; therefore, the heart starts to fail at its job.

The heart has four chambers. Like many mechanical pumps, the heart has two functional parts. The atria, seen above as thin-walled chambers labeled “left atrium” and “right atrium,” act as pump primers. Blood returning to the heart is held here and when the atria are full, they contract, pushing blood into the pumping chambers or ventricles. When full, these pumping chambers contract forcefully, pushing blood out to all the blood vessels in the body.

When dilated cardiomyopathy strikes these chambers, all enlarge because the heart muscle becomes weak and stretched. Blood is still pumped, but not effectively. Limb muscles and organs within your dog’s bodies need a constant and consistent blood supply to work properly. Ineffective circulation will cause muscles to become weak and organs to malfunction. This will result in some of the symptoms we discuss next. Additional symptoms are caused because fluid will leak from the blood when it isn’t pumped effectively. As a consequence, we see abnormal fluid accumulations on top of muscle and organ dysfunction. That’s why swollen ankles are a common sign of heart problems in people. You won’t see swollen ankles in your dog, but your veterinarian might see fluid leaking into the lungs, which causes breathlessness and coughing. 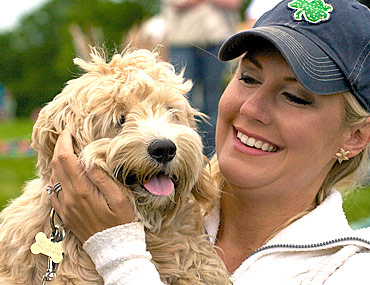 Symptoms
Your dog’s body has some protective mechanisms that help him cope with poor heart function early in the disease, so symptoms may not be obvious at first. With time, the heart’s ability to function becomes so poor that these mechanisms can’t keep up and symptoms of failure are easier to spot. When your dog’s heart first starts to fail, the muscles in his legs don’t get the blood they need and your dog may not be able to play or exercise as vigorously as he used to. This will become progressively worse as the disease grows and the heart gets weaker. Over time, abnormal fluid buildup in the lungs will cause your dog to cough and seem out of breath. The coughing can become so severe that your dog may even cough up blood-tinged fluid.

Diagnosis/Treatment
Your veterinarian will typically recommend a number of tests to fully evaluate your dog’s heart, and the effect that poor circulation is having on the rest or his organs.

If your dog is diagnosed with dilated cardiomyopathy, your veterinarian may prescribe the following treatment:

Drugs that do several of these things at the same time are available.

Prevention
Unfortunately, there isn’t much that can be done to prevent this disease. Because it is passed from generation to generation, selective breeding programs may be of some benefit. Early recognition of the presence of DCM is crucial so that treatment can start as soon as possible. For that reason, some high-risk breeds may undergo screening for early detection of this disease.