Multiple myeloma is a cancerous process that people and dogs have in common. This disease is also referred to as myeloma and plasma cell myeloma. Although not considered curable, this relatively uncommon canine disease can be successfully treated. 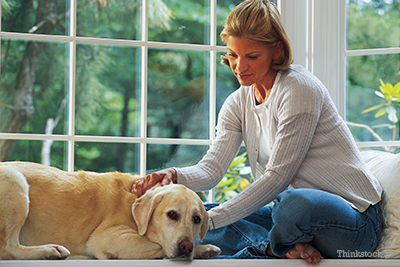 What is multiple myeloma?

Cause of multiple myeloma in dogs
According to a study found on PubMed.gov, multiple myeloma in people has been associated with exposure to toxic chemicals present in tobacco smoke and emissions from petroleum refinery waste dumps and industrial operations.

The cause of multiple myeloma in companion animals is unknown, and there is no breed or sex predilection. Middle aged to older dogs and cats are most commonly affected.

Symptoms of multiple myeloma in dogs
The major symptoms associated with multiple myeloma are caused by the spread of cancer cells, hyperviscosity syndrome (thick blood), and too few normal cells within the bone marrow (see explanations above). Additionally, some dogs and cats with myeloma develop hypercalcemia, a higher than normal level of calcium in the bloodstream. This hypercalcemia can produce a number of serious consequences over time, the most significant of which is kidney failure.

Because multiple myeloma cells can wreak havoc in so many ways, the symptoms associated with this disease vary from patient to patient. Most commonly reported symptoms include:

A battery of tests is typically performed to make the diagnosis as well as to evaluate the patient’s overall health. In addition to a thorough physical examination, testing may include:

Treatment of multiple myeloma in dogs
The key to successful treatment of multiple myeloma is getting therapy started as soon as possible, so as to eliminate the excess plasma cells before they manage to cause a life-threatening problem such as a stroke, hemorrhage, infection or kidney failure. Your veterinarian may refer you to a veterinarian who specializes in oncology or internal medicine. Such specialists have significantly more experience treating this relatively uncommon disease. Treatment may include:

Prognosis of multiple myeloma in dogs
Although multiple myeloma is not considered a curable disease, it is one of the more treatable forms of cancer. Most dogs respond well to chemotherapy with restoration of a good quality of life. In one study of 60 dogs with myeloma, treated with melphalan and prednisone, 92% experienced remission (evidence of the cancer partially to completely resolving). Average survival time for these dogs was 540 days1.