Just like people, many dogs develop age-related arthritis. Symptoms are far more common in larger breeds. Not only are the big dogs more predisposed to arthritis, their joint pain is intensified because of the extra weight they carry. 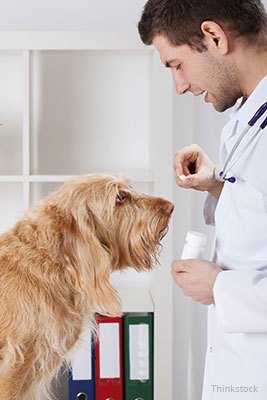 Nonsteroidal anti-inflammatory drugs (NSAIDs)
As their name implies, NSAIDs are non-cortisone containing drugs. They have both anti-inflammatory and analgesic (pain fighting) properties that produce greater ease of movement resulting in muscle strengthening and decreased strain on affected joints. Back in the 80s, when I was just a pup, the only NSAID available for dogs with arthritis pain was aspirin. While this drug did do a pretty good job alleviating arthritis, it also caused plenty of gastrointestinal side effects.

Fast-forward to 2015 and several big-name pharmaceutical companies have their own NSAID brand approved for the treatment of canine arthritis. Within the United States there’s Rimadyl®, Deramaxx®, Previcox™, Metacam®, EtoGesic® Zubrin®, Quellin™ and Novox®all of which are quite effective and associated with far fewer side effects than aspirin.

Just as in people, the specific NSAID brand that most effectively treats arthritis pain in dogs varies from individual to individual. Most veterinarians have their first choice recommendation, but certainly try other NSAIDs should the first choice fail to create significant improvement.

[Check out 'NSAID Medications and Dogs 101' for more]

Potential side effects
As is true for most any drug, negative side effects can occur with NSAID use in dogs. While the actual incidence of side effects is not known, it is thought to be low. When dosed appropriately, the vast majority of dogs tolerate NSAID therapy very well.

There tends to be an unsubstantiated fear that the longer NSAIDs are used, the greater the risk of associated problems. Dr. B. Duncan Lascelles, a professor of surgery and pain management at North Carolina State University College of Veterinary Medicine dispels this notion in a paper titled, “Risk-Benefit Decision Making in the Long-Term Use of NSAIDs for Canine Osteoarthritis.” According to Don Jergler of Veterinary Practice news, Lascelles states,

“We found that this was not true, there was no association between the longer you give a non-steroidal and the risk of side effects. As far as we can tell, we don’t find any relationship between those two things- length of non-steroidal use and incidence of side effects. Often, the clinical approach to a young or middle-aged dog with osteoarthritis associated pain is to avoid the use of NSAIDs. The rationale often quoted for this approach is that the practitioner wants to leave the use of NSAIDs for later, and not have a dog on NSAIDs for the whole of its life. This is a flawed and rather naïve approach.”

Lascelles goes on to say that, when NSAID side effects do occur, they are most likely to appear within the first two to four weeks after beginning therapy.

Proper screening of the dog by a veterinarian prior to starting NSAID therapy as well as appropriate follow up after medication has started, lessens the potential for adverse reactions. For example, an older arthritic dog discovered to have kidney failure would be ruled out as a good candidate for NSAID therapy. Observation of any side effects warrants immediate discontinuation of the NSAID and discussion with the prescribing veterinarian.

NSAIDs: One of several treatment options
While NSAIDs work well in many dogs, they are not the end-all and be-all treatment for arthritis. As a stand-alone therapy, they are inadequate for some dogs with chronic arthritis pain. Such animals are more likely to benefit from multimodal therapy in which an NSAID is combined with one or more of the following:

Therapy is important
Arthritis pain robs dogs of their ability to do many of the things they most love in life such as going for walks, wrestling with their favorite dog park buddy, going hunting, or playing a good game of fetch. Think about the exuberant Labrador who loves nothing more than chasing tennis balls and eating. Add arthritis to the mix and the game of chase must be curtailed. This means fewer calories burned which translates into fewer treats and smaller meals. What a drag for everyone involved!

In order to keep arthritis from negatively impacting a dog’s quality of life, it is important to treat this disease aggressively. This means treating daily rather than just on the day after a vigorous hike or when severe symptoms become apparent. Treatment should be started well before indicators of advanced arthritis pain such as limping or whining are observed. Dr. Jennifer Johnson, owner of Stoney Creek Veterinary Hospital in Morton, Pennsylvania states on the Veterinary Practice News website,

”From a pain-management perspective, I believe that my patients that are on chronic, daily NSAID use fare much better than the patients whose owners try to chase pain by giving NSAIDs as needed, or on tough days. It’s difficult for clients to judge definitively how much pain their pet is in, which makes it impossible to accurately dose the pain with an NSAID as needed.”

In summary, maximizing the benefit of long-term NSAID use for treatment of canine arthritis requires the following:

People medications are not safe for pets
Please don’t ever give your dog an NSAID that has been approved for use in people. Some examples include Advil®, Motrin®, Ibuprofen, Aleve®, Naprosyn, and Celebrex®. When administered to pets, even in small doses, they can cause life-threatening consequences.

According to David Samadi of nydailynews.com, the Food and Drug Administration (FDA) recently increased their warnings about the use of these drugs for people. After reviewing a number of studies, they have determined that NSAIDs significantly increase the risk of strokes and heart attacks. The FDA now requires that NSAID labels include the following: “The risk of heart attack or stroke can occur as early as the first weeks of using an NSAID. The risk may increase with longer use of the NSAID. The risk appears greater at higher doses.”

There is no evidence in dogs that documents an association between NSAIDs and the incidence of heart disease or strokes.