Scruffy’s Easter Egg Disaster: A Case for Training Dogs to Sit Politely Instead of Counter-Surfing 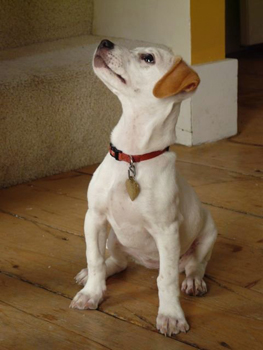 Dr. Sophia Yin teaches some important lessons when it comes to training your dog to leave unattended food alone. For more from Dr. Yin, find her on Facebook or at drsophiayin.com!

For most pet parents, having a dog that’s well-trained would be nice but doesn’t seem like a necessity. This is especially if the dog spends most of his time in familiar places—such as the home, or the yard, or just on short walks in the neighborhood. He may be so used to the scene that he never gets excited enough or distracted enough to be bothersome. But it turns out that you can’t count on life being so mundane. One family found this out the expensive way when their holiday house plan went awry.

It was Easter Sunday and Scruffy the scrappy fox terrier was having a good day. His family and a few familiar friends were over for some fun, kid-friendly festivities. Now Scruffy likes kids a little and was always happy to see his friends, but what he was really looking for was a chance at something else. An hour or so into the visit he saw his big break. In their haste to hide the Easter eggs and prepare the entertainment, someone had left an Easter basket filled with candy on the coffee table. As the kids carried their own baskets around in search of egg-shaped surprises, Scruffy eyed his low-lying feast. And then the moment all eyes were elsewhere, he inconspicuously plucked his sweet surprises.

It was a savvy heist except for one thing: too many clues. After a couple of hours of fun for the human families, someone finally spied something amiss. Scruffy was no longer a part of the party scene and a trail of scrunched aluminum foil leading from the Easter basket to his kennel told them why. A quick Easter basket check confirmed their fears. There was definitely some missed chocolate eggs! They tossed Scruffy into the car and shuttled him to the hospital.

Not everyone knows it, but chocolate can kill a dog. Oh, sure, a couch-sized mastiff can eat a batch of brownies, no problem. But mix just one chocolate bar with one Chihuahua, and within hours you'll get an explosion of bouncing off every wall in the house, or worse, the tiny terror will succumb to seizures or a coma. And that's just with milk chocolate. A good dose of baking chocolate and even the mastiff's a goner. The culprit is a chemical called theobromine, which is similar to caffeine.

Fortunately for Scruffy, his owners were on the ball and didn’t wait for his signs to get worse. Aside from a racing heart, Scruffy had no critical signs of toxicity yet. But judging from his twisted face, the pint-size thief was already paying for his crime in another way: with a tummy ache. He was lugging a stomach several Cadbury egg sizes larger than normal.

Scruffy got a medication to make him vomit without irritating his digestive tract further. Within a couple of minutes, he heaved and hoed and: a huge pile of pure liquid milk chocolate came spurting out. But maybe only two eggs' worth. Would he need something to absorb the remaining toxins?

As if to answer, Scrufy made more heaving noises and came up with something that resembled a chocolate milk shake. Then, a few seconds later, he looked up and wagged his tail. His belly was back to its usually trim shape.

Scruffy stayed at the hospital for a few hours, just to be sure enough he was back to his spunky self. No need for intravenous fluid, or anti-convulsants, or compounds to absorb the toxins in his stomach. He'd had a close call, but for Scruffy Easter turned out to be his lucky day.

How to prevent this problem in the future?
Of course the obvious answer to preventing this problem is to keep taboo foods such as chocolate, onions, grapes, and gum or candy with xylitol, out of range—up on a higher table or stored in a cabinet.

But in this case the goods were in what someone might consider a supervised situation. People were around, they just weren’t paying attention. This is why it’s absolutely essential that dogs learn that items on tables are taboo. But how do we teach this?

The first thought that comes to mind for most people is to set the dog up by putting food out and then just reprimand or punish him. That’s Old School from before the science of learning in animals had trickled down to the general population. The Old School method can come with a few problems, one of which is that the dog could just learn to avoid stealing food when in front of you. That’s because if the dog has a high desire and a tenacious personality (such as a terrier like Scruffy) you won’t change his desire by punishing him. He’ll still want the tasty treat, he’ll just find an alternate strategy for getting it, such as sneaking behind your back. Maybe you’ll notice when the item is gone, maybe you won’t. Or maybe you’ll think someone else is the culprit.

Ok, now don’t pretend that this is a problem only with dogs. Most people who work in a large enough group know of situations where prized food items have been stolen out of the community refrigerator at work. And ask yourself, how many people do you know who have snuck into the refrigerator and eaten items that others have explicitly said, “hands off”?

Given that we have to combat sneakiness, what should we do? We should train Fido to think that if he sits politely for items on tables and counters, then maybe, eventually, he’ll be given the item. We’ll start by teaching the game, “leave-it” when food is tossed on the floor.

Teach Fido that he’s not deprived, he just needs some patience.
In this version of leave-it, you’ll toss a treat on the floor behind you and then block your dog from getting to it by standing right in front of him. Note that as in basketball, you’re not allowed to grab him or pull on a leash. Rather, you have to outmaneuver him by quickly moving to block his path. If you think he’s faster than you, you may want to practice near a wall or in the hallway so that you can use the walls to help block him. At first he may move from side to side, trying to get to the treat. Keep out-maneuvering him until he stops and looks at you and then finally sits (Note: If it’s difficult for him to sit, work on this exercise first.) Reward him within a half a second once he sits and then follow-up with a sequence of bite-sized treats until he focuses on you.

Next, stand aside so he has a clear path to the treat, but don’t let him charge for it. Block him if he starts to look at it or gets up, but if he remains seated and looks at you for two seconds, then release him by saying “Free” or “OK” and pointing to the treat or pick it up and give it to him. Practice this 10-20 times in a row until the light bulb goes on and your dog realizes, “I can have the treat if I just sit and look at you. I just need a little patience.” Then once you know he’ll always sit within a second, you can start training the cue word by saying “leave-it” right as you toss the treat. Be ready to block him if he makes any movement towards the food before you give him the release word. 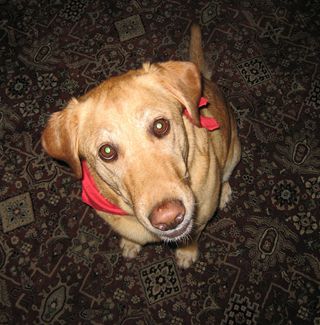 Now practice in the counter situation. Place something tasty on the counter and let your dog see it. As he looks at it, say “leave-it.” Block it if you think he might jump up. When he sits, give a string of tastier treats from you hand, and then once he’s sitting stably give him some bits of the items you put on the counter. You can always pretend you’re giving him what you placed on the counter if the item on the counter isn’t meant for dogs.  Next, reward him for sitting for longer and longer periods of time with treats coming at longer intervals. The goal is that you systematically train him that waiting longer periods of time earns may earn him that yummy “taboo” item off the counter. To help him form this habit super fast, go full bore on intense training for several days in a row. Instead of feeding Fido his regular meal, use it for sessions where he’s in the kitchen or in the room where he might surf on tables for food. Walk in and reward him at least 20 or more times for sitting and remaining seated in that environment. The goal here is that he learns that sitting in that environment is good. Then also work on placing food items on the counter the way you normally dog, but be ready: when he looks in the direction the food, block him or tell him "leave-it" (you need to block him if he doesn’t respond within a second) and reward him for sitting and remaining seated. Also make sure he NEVER has the opportunity to jump on the table our counter during these training days. Each time he gets the opportunity to practice the wrong behavior you should assume it will add 20-30 repetitions of rewarding the correct practice to negate!

If you practice this consistently and specifically practice the counter/ table situation at least 5 to 10 times a day, you can quickly convert a sneaky countersurfer to one who can be safely around food left on tables. In fact, you’ll even know that you're getting the message across when you see that your dog sees something on the counter or coffee table and he sits politely!

Of course, you never want to leave Fido unsupervised for long periods of time around taboo items within his reach unless you know he has more impulse control than the average human who’s on a diet but is locked alone in a room with brownies, pies and other savory snacks. But by working on this exercise you’ll feel confident that your Fido will at least have enough self-control to be in supervised situations around the scrumptious human snacks that temp him from atop a table.