Missing Cat Reunited With Family Over a Year Later

Mia, a cat who escaped her family’s vacation cabin over a year ago by way of a faulty screen door, is now reunited with them, reports Life With Cats and KATV ABC news.

Mia had accompanied her family, the Tuckers, from their home in Hot Springs, Arkansas to the cabin in Alabama last March. The family had come to attend a graduation just across the state line. Mia managed to get outside the same night they arrived and disappeared into the darkness. “I put her in the room, walked out, when I started to get Missy, Mia walked out the screen door and it was pitch dark out there,” Bill Tucker said during his interview with KATV. 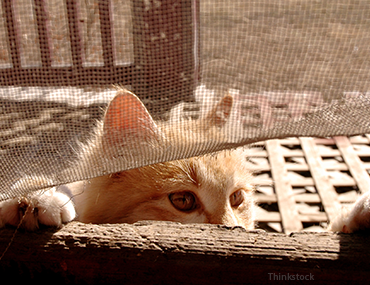 The family cancelled plans to search for Mia over the next few days, but they were unsuccessful, and had to leave the campground without her. Still, they refused to give up on the search. The Tuckers actually went so far as to purchase a new pickup truck and trailer to take on the road and search. “We took off after her, to find her,” said Bill. “We were going to stay as long as it took.”

The Tuckers also enlisted public assistance and posted photos of Mia in the local paper. Fortunately, a woman named Cheryle Nevels saw the photos and volunteered to help with the search. Nevels loves cats and dogs and lived in close proximity with the location where Mia had disappeared. Nevels spotted Mia last Thursday under a cabin not far from where the Tuckers had stayed almost one year ago.

The family is now happily reunited and Bill believes that Mia was waiting for them all along.