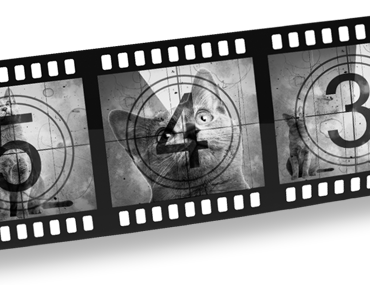 I love movies. I love pets. I love history. Add those together and I unearthed the story of the very first movie star cat, Pepper. Long before YouTube created instant fame from felines frolicking in boxes, there was a story cat that would go on to star in some of Hollywood’s most celebrated silent films. This is the legend of Pepper.

You may not know the name Mack Sennett but you know his work when you see it. Sennett was born in Canada in 1880 but quickly immigrated to Hollywood to pursue fame and fortune in acting. In 1912 Sennett founded the movie studio that would forever change comedy, Keystone Studios. Keystone as in Keystone Cops. Sennett as in the innovator of slapstick comedy. Speaking of slapstick, the term originated from the theatrical device the “batacchio,” or “ slap sticks” which was two wooden slats hit together to accent actors striking each other onstage. Sennett used the batacchio to such incredible effect that it became synonymous with his particular style of comedy. Sennett helped launch many notable actors of his age including Charlie Chaplin, Gloria Swanson, Mabel Normand, The Keystone Cops, Bing Crosby, and WC Fields. But the actor I’m most interested in was his feline find, Pepper. Sennett earned the Academy Award in 1932 and the Academy Honorary Award in 1937.

When Sennett opened his studio in 1912, a tiny gray cat was born underneath his soundstage. One day during filming, Sennett noticed a dark ball of fur wriggling through a loose floorboard. Instead of yelling, “Cut!” he let the cameras roll. The tiny kitten emerged from the dark crawlspace into the bright klieg lights and kinetic stage. Sennett watched in amazement as the kitten calmly strolled into the scene and appeared as though she had been written into the script. Sennett knew he had a star on his hands and quickly dubbed her “Pepper.”

During her first year, she appeared uncredited in many early Keystone Cops comedies. In 1913 she received her first big screen notoriety as her name was emblazoned across “A Little Hero.” In that same film Pepper would be paired with her lifelong acting partner, the first movie star dog, Teddy the Dog. Pepper would go on to co-star with Charlie Chaplin, the Keystone Cops, and fatty Arbuckle. She was often paired with the beautiful Marie Provost. Pepper received 17 credited movie roles and at least that many uncredited appearances during her career. She famously played checkers onscreen with the great comedian Ben Turpin and starred alongside Turpin in a total of six films.

Pepper was a fixture in Sennett’s films for 16 years until 1928. When her canine co-star, Teddy the Dog (aka Keystone Teddy, America’s Best Friend, and Teddy the Wonder Dog), passed away sometime after 1923, Pepper went into a period of deep mourning. She never acted again after Teddy’s death.

The next time you click on a cute cat You Tube video, remember Pepper. Without her unique personality and skills, our perspective on cats in videos might’ve been very different.