A service dog named Orlando placed himself in mortal danger while trying to save the life of a blind man, reports Colleen Long of the Associated Press and Brian Williams of NBC News. Cecil Williams was on route to the dentist Tuesday morning when he passed out on the 125th Street platform. According to the associated press, Orlando is trained to protect Cecil from falling over the edge. “He tried to hold me up,” said Cecil after the ordeal. Witnesses confirmed that Orlando did what he could to keep Cecil from toppling over, but in the end Cecil tumbled onto the tracks. Mathew Martin, a witness, told the New York Post (reported by Edmund Demarche of Fox News), “he went down and the dog jumped down. [The dog] wasn’t pulled. He was kissing him, trying to get him to move.”  Orlando was on the tracks with Cecil as a train approached and rolled over both of them. Amazingly, both were spared serious injury.

Cecil wasn’t surprised by Orlando’s heroic act. “He saves my life on a daily basis,” he told the associated press.  Click here to watch the full video. 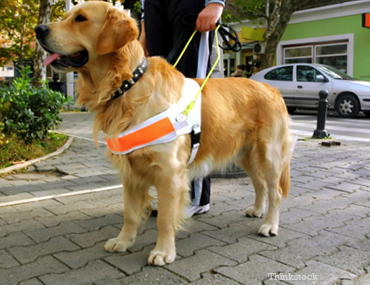 What makes this incredible story even better is the ending. As Christina Caron of NBC News reports, Orlando is set to retire in January, and Cecil’s insurance won’t pay for a non-working dog. Cecil can’t afford Orlando without help and would have had to say goodbye to his brave dog, had it not been for their experience on the 125th Street platform. After the story aired on NBC News, anonymous donations were made to Guiding Eyes for the Blind that will allow Cecil to keep Orlando forever.

It’s excellent news that Cecil will get to keep his beloved dog; fortunately, Orlando  and many other service dogs like him are well taken care of after retirement. As reported by Edmund Demarche, had Cecil been unable to keep Orlando the dog would not have gone to a shelter. “Orlando’s future was never in question,” said Michelle Brier, the director of marketing for guiding eyes for the blind. “He was set to be adopted by the family who raised him when he was a puppy.”

Orlando is a prime example of the extraordinary efforts service dogs will go through to protect their people. Service dogs are specially trained to recognize and avoid danger and must be on high alert much of the time.