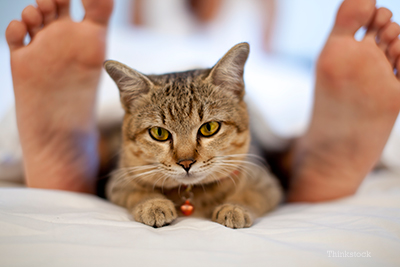 It happened when we were watching “Jurassic Park” with my two daughters. Onscreen the two children visiting the dinosaur park are trapped in an overturned SUV. Out of sight, a T Rex lumbers loudly toward them. Delightfully dozing during Friday movie night was our family patriarch and self-proclaimed protector, Freddie Cat. I was stealthily spying on my girls to determine if the scene was a little too scary and maybe a little fast-forward action was necessary. And that’s when I noticed it. As my daughter’s pupils widened, pulse quickened and jaw dropped, Freddie’s eyes popped open and he studied her intently. He eased up, arched his back, and stood at attention. I had just witnessed Freddie Cat demonstrating a behavior psychologists call “social referencing” that serves as the topic of exciting new research published in the January 2015 issue of Animal Cognition.

“Social referencing” refers to the act of looking to another person to gauge how you should be reacting or feeling. The classic example, presented in a 1988 Child Development Journal study, is of how an infant emotes after observing a parent. If a mother or father is smiling and laughing, the infant typically smiles and acts happy. If a parent frowns or cries, so does the baby. A 2012 PLOS study concluded that dogs engaged in similar social referencing behavior with their owners, but not as much with strangers. So what about cats?

Cats and social referencing
The traditional image of cats is of an independent, aloof, often seemingly superior creature that merely tolerates its human servants. I agree with the cats. Critics often downplay the intelligence of cats until you point out that humans literally carry their pee and poop away, lest they punish us by making “deposits” on our beds. Who’s the smart guy in that relationship? But seriously, little was known about how human moods and behaviors affect our cats. Are cats oblivious to their owner’s emotions? Does our attitude influence how our cats act? I already thought I knew the answer but it’s exciting to see genius scientists ponder the same question. Makes me feel special, in a social referencing kind of way.

The study examined two groups of cats: One that received a positive emotional message from their owner, the other a negative when a new, potentially frightening object was introduced. The object in question was a fan with green ribbons on it1. Scary, especially if you’re a cat in a room for a psychology study. The researchers wanted to see if the owner’s reaction affected the cats. If an owner was cool and nonchalant toward the fan, how would the cat react? If the owner appeared nervous and acted scared, would the cat freak? Or would the cats crawl into a corner and take a nap?

79-percent of cats in the study looked at their owner to see how they were responding1. This matched observations in dog studies, indicating both dogs and cats rely on their owners for emotional cues when placed in an unfamiliar situation. Cats in the positive message group were more likely to move toward the fan and less likely to look for an escape route. Cats whose owners appeared frightened or nervous were less likely to go near the fan and appeared to search frantically for a way out of the room1. My Freddie Cat was no outlier; cats’ attitudes appear to be influenced by their owners.

For years I’ve instructed owners of terminally ill dogs and cats to keep their emotions in check when they’re around their sick pets. As a veterinarian, I knew if an owner was worried and sad, my patient was more likely to be stressed. I advised owners to maintain a positive outlook in order to maximize the chances of a successful outcome. This research further validates my suggestion. The takeaway message is our emotions influence the moods of everyone around us, pets included. Want a happier cat? Live a happier life. Our cats are copying us.