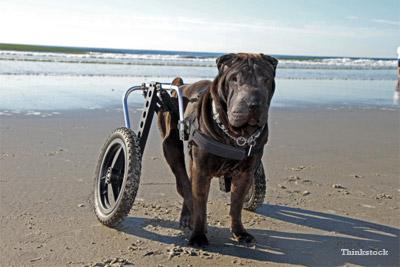 There are many causes of paraplegia or hind end paralysis in dogs. Far and away, the most common cause is intervertebral disc disease (aka, slipped disc or herniated disc). Dachshunds are the “poster dogs” for this disease. Surgery to remove the disc material compressing the spinal cord can prevent paralysis in many cases. For some dogs though, surgery is ineffective. Additionally, many people simply cannot afford this expensive treatment option.

A new study on paralysis in dogs provides new hope
A recent study, performed at North Carolina State University, offers some new hope for dogs with paraplegia. The researchers at NC State studied 19 dogs, all of whom had paraplegia caused either by disc disease or trauma. All of the dogs had been chronically affected and were only chosen for the study if it was believed that they had maxed out on their neurological improvement.

Study design: paralysis in dogs
All of the dogs in the study were treated over time with three different things:

Throughout the testing period, those observing the dogs were “blinded” as to which one of the three things each dog was receiving. During weeks one and two, all dogs received the placebo. Throughout weeks three and four, half of the dogs were treated with 4-AP and half with t-butyl. The dogs received nothing during weeks five and six so as to allow the drug to wash out of their system. They then received the drug they were not yet exposed to during weeks seven and eight. All dogs again received the placebo during the final two weeks.

Results of paralysis in dogs study
13 of the 19 dogs completed the protocol. The researchers found that there was little difference in effectiveness between the two drugs. Both produced improvement in some dogs’ ability to step compared to the placebo. However, the levels of response were variable, ranging from no improvement at all to marked improvement in three dogs able to take steps on a treadmill without any support.

The t-butyl was extremely well tolerated by all of the dogs. Two dogs suffered side effects from the 4-AP including gastrointestinal upset and seizures.

Conclusions of paralysis in dogs study
The study results indicated that both 4-AP and t-butyl produce significant improvement in some dogs with paraplegia caused by intervertebral disc disease or trauma. Best of all, t-butyl seemingly does so without producing the side effects of its parent drug, 4-AP. The major question that remains is why did some dogs show dramatic improvement while others were seemingly unaffected?

Dr. Natasha Olby, one of the study researchers stated in an NC State article, “The question quickly went from, ‘Do the drugs work?’ to, ‘Why aren’t they having similar effects across the board?’ And there are many possible factors to consider—some of the dogs may not have any axons left for the drug to act on, or it may depend on how long they’ve been paralyzed or even whether or not they have a genetic predisposition to respond to this treatment. There is no doubt that either or both of these medications can have an amazing effect on the right patient, but now we have to do the work of finding out what conditions make the patient the right one. If we can do that, we may save both patients and owners a lot of unnecessary frustration.”

My fingers are crossed that Dr. Olby and her colleagues are successful in their ongoing research.