Prince, a 15-year old cat, went to his family veterinarian because of a poor appetite, vomiting and not feeling well. His veterinarian recommended blood work to see what Prince was not telling them. Blood work revealed elevated liver values, pointing to some form of liver disease. While many 15-year-old patients may have higher than normal liver values for various reasons, the Doctor recommended an abdominal ultrasound.

Prince was very fortunate to have a loving and dedicated guardian. I would encourage all pet guardians to do as Prince’s did and pursue recommended tests, like an abdominal ultrasound. Read on to find out why. 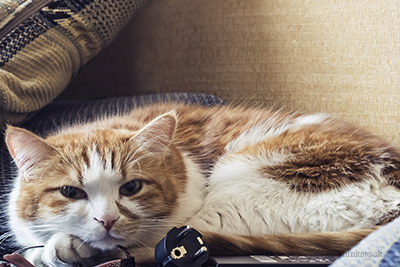 What did the ultrasound show?
The ultrasound revealed a 3 inch diameter mass in Prince's liver. The most likely diagnosis was liver cancer. This explained the high liver values on his blood work as well as his down-and-out demeanor.

Surgery was recommended to remove the mass, along with a biopsy. A biopsy is a thorough examination of the mass to study what type of cells it is made of. It tells veterinarians whether the mass is benign or malignant (i.e. cancerous). In addition, the pathologist evaluates whether the mass removal was complete by studying the edges or “margins” of it. Obtaining “clean margins” means that the mass was completely removed, which is of course the ultimate goal.

Statistically speaking, the mass seen on the ultrasound was likely to be cancer. Again, Prince had a very loving and incredibly dedicated guardian. She elected to have the surgery done, despite Prince’s age and the likelihood of a poor outcome. We had a heart to heart about the high likelihood of cancer, the limited life span, the risks of anesthesia, the risks of surgery and the postop care.

Without any hesitation, the owner elected surgery. She had to know and she wanted to help.

Prince’s liver surgery
Surgery went smoothly. A large and ugly mass, about the size of a big plum, was removed from Prince's liver. “Ugly” is a secret veterinary code word that means “this mass has to be cancer.” All other organs in the belly looked fine, as did the rest of the liver. Prince recovered nicely from anesthesia. In fact, he was sitting up less than 10 minutes after the end of anesthesia. The tumor was sent to the lab for analysis.

Prince was kept on IV fluids, pain medications and antibiotics overnight. The next day, he started to eat in the hospital–-which is not a common observation for a sick cat in the hospital. And so Prince went home the day after surgery. He had to wear a plastic cone around his neck for two weeks, until the stitches were removed from his skin. He received pain medications and antibiotics for a week, and he had to be kept confined for 4 weeks.

About one week after surgery, the biopsy result arrived. Despite everybody’s firm conviction, amazingly, the biopsy showed that the mass was benign. Even more surprisingly, it was not even a tumor. It was a multitude of cysts that created this huge mass. Removal of the mass was complete, so hopefully it would never come back. Prince continued to recover smoothly and was soon back to his normal self.

Although the odds may have been against him, the recommendation of his veterinarian proved its worth, and the surgery was curative. In addition, the biopsy gave Prince's guardian the peace of mind she truly deserved.

Questions to ask your veterinarian if your pet has a mass: