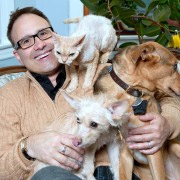 Steve Dale, a contributing member of IDEXX’s Pet Health Network team, is a certified animal behavior consultant, and co-editor of “Decoding Your Dog,” authored by the American College of Veterinary Behaviorists,” and is host of several pet radio shows. Steve’s blog is www.stevedale.tv

For five years, he was a Chicago Tribune blogger, and he contributes blogs on various other websites, including for Victoria Stilwell.

He’s written introductions or contributed chapters to over 20 books, including “Bonding With Your Dog,” “Dog Spelled Backwards,” “The Compassion of Dogs,” “Raising My Furry Children,” “Christmas Cats” and “Angel Animals and the Kids Who Love Them.”

Steve was a contributing editor, USA Weekend (2002 to 2014), and regular columnist at Cat Fancy magazine (2006 to 2014), and has written for a long list of magazines, from People to Dog World (where he was a columnist). He’s currently a columnist for CATster and Rescue Proud.

He was an external reviewer for “Feline Behavior Guidelines” (American Association of Feline Practitioners, 2005), and is a contributor to the textbook “The Cat: Clinical Medicine and Management” (edited Dr. Susan Little, 2011). He’s the primary author of the CATegorical Care: An Owner’s Guide to America’s Number #1 Companion (reviewers include AVMA, SAWA), published American Humane Association/CATalyst Council, 2010). He co-authored (with Dr. Sagi Denenberg) the American Veterinary Society of Animal Behavior Position Statement on Breed-Specific Legislation (2014).

Steve is also a part of an AVMA/AAHA initiative to encourage preventive care veterinary care, called Partners for Healthy Pets. In 2014, Steve co-founded Veterinary Professionals Against Puppy Mills. Steve is a member of the Pet Partners Human-Animal Bond National Advisory Board (2015).

Among Steve’s many awards: the AVMA Humane Award (the only AVMA honor bestowed to a non-veterinarian), Editor and Publisher syndicated newspaper Feature Writer of the Year Award, AKC Responsible Dog Ownership Public Service Award, HSUS Pets for Life Award. He has also been honored with over 15 Maxwell’s Awards from the Dog Writers Association of America and over 15 Muse Awards from the Cat Writers’ Association of America. He’s also been honored by the Chicago Veterinary Medical Association, University of Illinois College of Veterinary Medicine, and was the first recipient of the Winn Feline Foundation Media Appreciation Award, and many others.

In 2012, Steve became the youngest person ever inducted into the Dog Writers Association of America Hall of Fame.

After his beloved cat Ricky passed away in 2002 of feline hypertrophic cardiomyopathy (HCM), Steve created a fund to raise money to research this often-fatal disease. He’s raised well over $100,000 – and as a direct result a genetic test was created to determine if a gene defect for HCM exists for two breeds.

Steve’s a regular speaker at veterinary and shelter conferences around the world, and for shelter fundraisers, and other special events. Steve’s presented at each of the major U.S. veterinary conferences (numerous times), and several times for the International Association of Animal Behavior Consultants. He’s also spoken at the World Small Animal Veterinary Association Conference, Caribbean Veterinary Conference and many others.

Two of Steve’s favorite honors: Commencement Speaker at Madison Square Garden for Ross University School of Veterinary Medicine (2008), and appearing (in 2012) as 59 across in a TV Guide Crossword Puzzle (pet journalist Steve _ _ _ _).