Why Are My Senior Dog’s Behaviors Changing (CDS)? 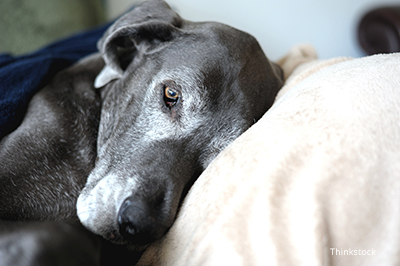 While the development of better and better pain management products means that pets can live more comfortable, pain free lives, there is growing awareness that senior pets can develop cognitive issues such as cognitive dysfunction syndrome (CDS). Unfortunately, this condition is frequently not treated in dogs. In a Pet Age article, Rebecca Harrison reports that the The Journal of Veterinary Behavior conducted a study that estimated over 14% of senior pets have CDS, but less than 2% of guardians are addressing the problem.

Effects of aging on dogs
Much as for aging humans, dog behaviors can change significantly from one year to the next. Dogs affected by CDS can experience rapid changes in their behavior.

It is not uncommon for pet guardians to attribute significant changes in behavior to “old age,” says Dr. Marty Becker, according to Harrison's article. But there could be more at work than just that. Brain changes can occur sooner in life and more frequently than generally believed. Senior pets may become less interactive and playful. They may be more confused and may revert to house soiling behaviors like a puppy.

Signs of cognitive dysfunction syndrome in dogs
According Gary Landsberg, DVM, DACVB, in his paper “Therapeutic Agents for the Treatment of Cognitive Dysfunction Syndrome in Senior Dogs,” symptoms of CDS in dogs are not unlike those in humans and can include:

CDS is often a devastating condition in people affecting, not only the individual, but friends and family too. There is a good deal of awareness and concern about cognitive disorders in humans and there continues to be a good deal of study about cognitive disorders in people. However, because the level of interactions between pets and people is quite different than between groups of people, many are unaware that dogs too may suffer from CDS.

What other changes could occur in senior dogs?
According to Harrison’s article, Dr. Becker says that it isn’t just cognitive function that dissipates. Physical changes like diminished eyesight, impaired hearing and discomfort associated with joint disease are common in senior pets. Living with a senior pet requires special patience and awareness of basic needs for comfort.

Supporting senior brains
But how can pet guardians ease the behavioral symptoms associated with loss of cognitive function? Unfortunately most products and supplements that are used lack scientific evidence of efficacy. While studies continue, the use of these products is largely empirical and anectdotal. Although, according to Landsberg, “In some cases clinical trials have validated their efficacy.” These products include certain oils called medium-chain triglycerides, a chemical called apoequorin and other antioxidents.

Harrison reports that two separate studies by Milgram et. al. found that dosages of apoaequorin administered to elderly dogs with memory problems led to an increase in both their ability to distinguish different stimuli and visual learning.

Continual stimulation and enrichment may help prevent the onset of CDS in dogs1. As in people, a combination of behavioral and nutritional or pharmacological interventions may be optimal for reducing the rate of age-dependent cognitive decline.

Be sure that your veterinarian performs a complete evaluation of your dog’s physical condition before you assume changes are, "just old age."