Brought to Britain by the Romans over 2,000 years ago, the British Shorthair has come a long way since its early days as a mouser and ratter. Over the years, the British Shorthair interbred with cats native to Britain, and later with Persians (which contributed to their thick coat). Eventually, the breed became more popular for its placid and loyal personality than its hunting abilities. 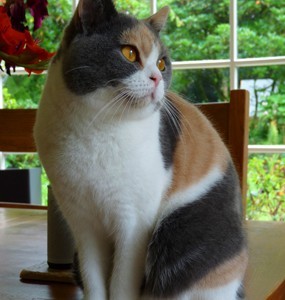 While the popularity of the British Shorthair declined some during the 1940s – food shortages during WWII also almost led to the breed’s extinction – the breeding program was revitalized during the post-war period. The breed was officially recognized in the United States in the 1970s, and today the British Shorthair is one of the most popular breeds in Europe and America.

Cat Facts
Here are some more interesting facts about the American Shorthair:

What are they like?
Displaying a reserve typical of the British, the British Shorthair is an even-tempered, easy-going cat that could even be considered shy. Loyal and loving, the British Shorthair will bond with the whole family rather than just a singlespecial person. They are independent, adaptable, and understated and while they don’t need loads of affection, but they are also just as happy sitting on your lap being stroked.

The British Shorthair greets visitors and other pets with a warm welcome, and he is a very smart breed of cat that learns quickly. You shouldn’t be surprised if your British Shorthair learns to open a door or a cabinet with ease!

As breeds go, the British Shorthair is one of the healthiest. He is only prone to a couple hereditary health problems:

Right for you?
The British Shorthair is a great breed of cat for people who have the time to spend with one. Here are some things to consider if you’re thinking about welcoming one into your home: