Background
The origin of the Russian Blue cat breed is a bit of a mystery, but most experts believe that they originated in the port of Arkhangelsk, Russia – also known as the beautifully-named Archangel Isles. In fact, because “Arkhangelsk” means “archangel” in Russian, these distinctive looking cats are also known as Archangel Blues.

The breed made the trip from Russia to Great Britain sometime in the mid-1800s, likely brought by sailors. Though the Russian Blue first appeared at the Crystal Palace in England in 1875, its development was limited to Scandinavia and Russia until after the Second World War. During this time, it was interbred with Siamese cats. After the war, the breed made its way over to the United States. Today, most of the Siamese has been bred out, and the Russian Blue is one of the most popular cats in America. 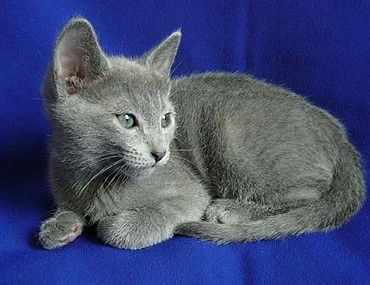 Cat facts
The Russian Blue is a naturally occurring breed, meaning it is not the end result of breeders mixing cat breeds together. In addition, the Russian Blue has quite a legacy! Here are some interesting facts:

What are they like?
The Russian Blue is one of the most beautiful cat breeds around: the stunning, plush double-coat of blue tipped with silver, the shining emerald eyes, and the large elegant ears are easy to fall in love with.

Russian blues can be shy, especially around strangers, but don’t mistake their reserved personality for a boring one! They can be very sweet, affectionate cats once they warm up to you. Russian Blues can be very playful and, like most cats, love to jump, climb, and survey the world below. Russian Blues also love to play with feather toys, and are even happy playing fetch. They are also very smart and easy to train.

The Russian Blue is a very healthy, hardy cat with no specific health problems.

Right for you?
Here are some things to think about if you’re considering welcoming a Russian Blue into your family: