History
Although the Maine Coon’s origins are a bit obscure, there are a lot of interesting stories surrounding its history. One story goes like this: Marie Antoinette, Queen of France, attempted to escape to America before her 1793 execution with the help of a ship captain. She never made the voyage, but her belongings did, including her longhaired Turkish Angora cats. When they landed in Wiscasset, Maine, the cats promptly bred with existing shorthaired breeds and evolved into the Maine Coon.

Another tale involves Charles Coon, a British sea captain who sailed New England coasts in the 19th century and brought some of his seafaring cats into port with him. His sailor cats mated with local cats, and their offspring were called “Coon’s cats.”

Whatever you choose to believe, the Maine Coon has been around for a long time. His popularity has waxed and waned over the years, and he wasn’t an officially recognized breed in the United States until 1975, but today the Maine Coon is the second most popular breed of cat in America.

Cat Facts
The Maine Coon is a pretty neat breed, and here’s why: 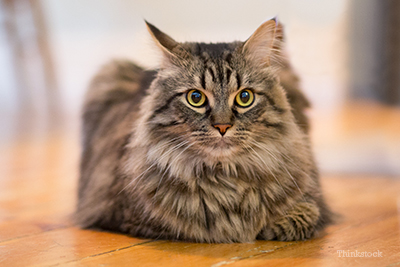 What are they like?
Like the Great Dane in the dog world, the Maine Coon is the gentle giant of the cat world.

The Maine Coon loves his people, but he’s not needy. He loves to hang out on the periphery of family events and take affection as it comes. While not a lap cat, the Maine Coon still enjoys a good snuggle.

An easy-going breed of cat, the Maine Coon can also be lively and playful, and they’re incredibly intelligent. He’ll play fetch, walk on a leash (with some dedicated training), and is a good traveler. He gets along well with kids, dogs, and other cats.

The Maine Coon evolved to survive in harsh northern alpine climates, and he is hardy in appearance like a weathered mountain man. His coat is long, thick, and water-resistant, but that doesn’t mean it’s difficult to groom. A weekly combing session will keep him happy.

The Maine Coon cat is a very hardy breed of cat, prone only to a few medical conditions: