The Australian Cattle Dog was born from a need to herd cattle more effectively over the rough terrain of the New South Whales Colony. George Hall and his family settled that region in 1802 and had established cattle stations in 1825. It became clear to them (specifically George), that the current herding dogs in the region could only go for short distances and weren’t sufficient for his needs. He therefore built a new breed using tamed Dingoes and Highland Collies. For years the Hall family kept these dogs to themselves, as the dogs provided a distinct herding advantage. In 1870 Thomas Hall (George’s son) passed away and the dogs were made freely available at auction.

After the dogs were made public they were quickly noticed by the Cattle Dog Club of Sydney and by its most notable members: the Bagust family. The first breed standard was written in the 1890’s by a friend of the Bagust family and accepted soon after. The Bagusts also took it upon themselves to crossbreed Hall’s existing dogs with the Dalmatian. The resulting dogs looked like Dingoes but had different markings. They were the forbearers of the modern day Australian Cattle Dogs.

America was slow to catch onto the usefulness of the ACD. He wasn’t recognized by the American Kennel Club until 1980 when he joined the working group. Once Americans had a chance to see the ACD in action his numbers saw a dramatic increase. 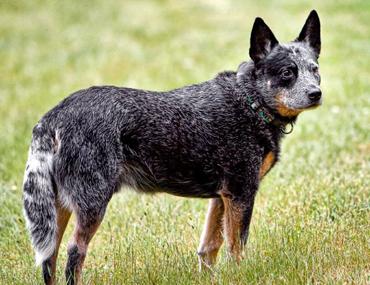 The ACD was bred to herd cattle all day and night over difficult terrain. He maintains that energy level even today and will require intense levels of activity to stay happy. He’d like to be running in a wide open space and will herd whatever he can find. It’s important that you dissuade your Australian Cattle Dog from nipping at ankles as all herding dogs are prone to do. If not entertained, both mentally and physically, the ACD will get into trouble. He can be great with older children but might be too much for younger kids. He also might try and herd them.

Training an Australian Cattle Dog can be challenging as he’s an independent thinker and likely to believe he knows best. Success will require challenging games and a dominant leader. Use positive rewards and not negative reinforcement. If done right the ACD can be one of the most well behaved dogs you’d ever meet.

Even a well trained ACD will be reluctant around strangers. They make great guard dogs for this reason. He has an innate desire to protect his loved ones.