Contentious rumors have dated Basenjis to the days of Egyptian Pharaohs. Drawings of that time seem to support the notion that very similar looking dogs were given as gifts, but whether they were in fact Basenjis is difficult to prove one way or another. Basenjis as we know them today were found in the remote African Congo where they were used in packs to drive game into the waiting nets of local tribes.

Several attempts were made to import Basenjis into England during the late 1900s, but those were thwarted by distemper which killed the dogs soon after their arrival. It wasn’t until the 1930s that attempts were finally successful and the first litters were established. Their popularity grew steadily aided by popular culture in the 1950s.

Basenjis found American supporters during the mid 1900s and after additional dogs were brought into the country the American Sighthound Field Association allowed the breed to compete in their trials.

The American Kennel Club recognized the breed in 1943. 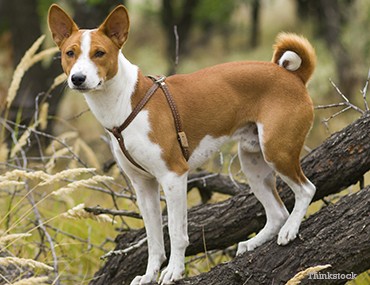 Basenjis are the perfect dog for the right owners and a disaster dog with the wrong owners. The right owners will be patient and not overly upset when they find household items chewed on or destroyed. Basenjis are independent and very curious about the world. They also have a strong prey drive causing them to chase after any small animal. If you live near heavy traffic, and probably even if you don’t, keep the Basenji on a leash or behind a fence. (Keeping in mind Basenjis can climb low fences.)

Basenjis can be untrusting of strangers and aloof even around family members; however, they might also choose one member of the family to form a strong bond with. They would prefer to be around older kids because they can often feel smothered by younger children.

Basenjis can be difficult to train but are actually very smart. They would simply prefer to do things their own way. This might prove an especially tense time in your relationship – stay positive!

Basenji’s natural unease around strangers makes them an excellent watchdog, and although they don’t bark Basenjis will be quite vocal when they have a concern.

Basenjis need as much exercise as any other hunting dog, don’t be fooled into thinking they’re lap dogs or couch potatoes.

Basenjis are one of the easiest breeds to groom.

Conditions to watch for in the Basenji include the following: