The Bull Terrier finds his ancestors in the brutal and cruel days of dog-bull and dog-bear fighting. Europeans of the time found dog fighting to be an entertaining sport, and were always on the lookout for new breeds to enter into the ring. In 1835 a cross between the Old English Terrier and the Bulldog produced a dog called “Bull and Terrier.” This new breed ruled the world of dog fighting and gained a sizable fan base.

After dog fighting was banned the Bull and Terrier mix found its place alongside English men going about daily activities. He would defend himself in a fight but he wouldn’t start one making him the perfect street companion for many.

In 1960 James Hinks began to breed the Bull and Terrier with an eye on fashion instead of function. He crossed it with Dalmatians and with his own Bulldog to create an all white version of the Bull and Terrier, which came to be known later as the Bull Terrier.

The Bull Terrier gained a reputation as a gentlemen’s dog and before long his popularity had spread to America. 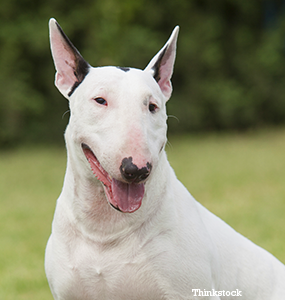 The Bull Terrier should only be taken on by pet veterans. He is sweet natured and playful, but his instincts can make him difficult to handle. The Bull Terrier has a strong prey drive and will chase anything. He’s also tough and prideful. He won’t take direction easily so early training is essential.

The Bull Terrier can’t be left outside alone, but he also won’t be happy inside doing nothing. He’s high maintenance and could walk for many miles per day. Indoors the Bull Terrier should be supervised around children and pets. He might not get along with other dogs unless they’re the same sex. He can tolerate cats but often only if he grows up with them.

A Bull Terrier parent needs to walk a fine line. He will respect firmness and consistency but won’t respond well to punishment.

All Bull Terrier puppies should be checked for deafness as this is a relatively common condition.