Border Terriers are named after the border between England and Scotland where they originate. They were utilized by farmers to hunt down pestering foxes. Border Terriers had long enough legs to chase after horses and small enough bodies to fit into fox dens. Their versatility made them popular and over time they evolved from a casual farmer’s dog into a serious hunter’s dog working closely with other foxhounds.

Border Terriers were first shown in 1870 but didn’t catch on as a show dog. It wasn’t for another sixty years that they were accepted by the American Kennel Club, after the breed standard was written by Jacob Robson. 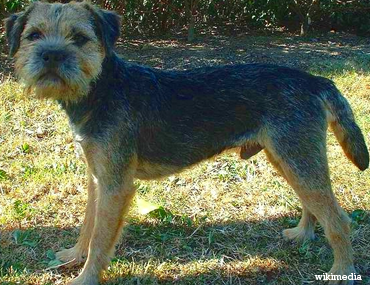 The best part about Border Terriers is that, like clay, they’re easier to mold than other versions of terrier. They’re instinctually vermin hunters but can get along fine with cats or other dogs. They take to training easily and are smart enough to master commands quickly. They’re well suited for hunting, running, or therapy; you could show a Border Terrier how to perform just about any activity without much trouble.

At home Border Terriers are loving and loyal but still independent. They won’t stick to the family like glue but they will want to be a part of the action. Speaking of action, border terriers are active dogs and require at minimum one long walk every day. Without having the chance to stretch their legs you’re looking at a destructive and frustrated dog.

The longer legs of Border Terriers give them the ability to run faster and jump higher than other terriers. You’ll defiantly want to be aware of this if you’re building a dog fence. They can also dig underneath fences and are always looking to chase small animals.

Border Terriers should be brushed weekly.

Conditions to watch for in Border Terriers include the following: