Background
The “Bouledogue Francais,” or French Bulldog, likely descended from the English bulldog. Judging by his smaller size and bat-like ears, most think that the French Bulldog actually arose from the toy or miniature Bulldog, which originated in Nottinham, England, where he was used as a ratter in the shops of laceworkers.

During the industrial revolution, lace workers displaced by the rise of machines moved about Europe looking for work, and in the shuffle, their little Bulldogs ended up in France, where they were immediately popular. In fact, the French Bulldog was a fashionable companion in bohemian society, favored by society ladies, prostitutes, artists and writers throughout France.

Today the French Bulldog, big ears and all, is one of the most popular dogs in the U.S. 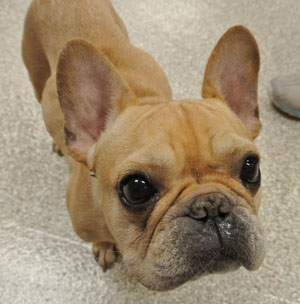 With his bat shaped ears and bow-legs, this little guy resembles an alien. But he’s no stranger to affection!

The French Bulldog is charming and pretty easygoing. He’s quietly enthusiastic, often preferring to sit and watch what’s going on around him. He also loves to goof around. He generally gets along well with other dogs – though at times he wants to be the alpha dog, this can be addressed through training.

One of the best things about the French Bulldog: he’s the ideal dog for city-dwellers. As a mellow, smaller dog that doesn’t need a ton of exercise, he does very well in the confines of an apartment. He won’t bark or get too worked up, unless you aren’t able to spend enough time with him.

The French Bulldog is generally healthy, but also prone to some genetic medical problems:

Right for you?
As with any new pet, there are some considerations to make before you welcome an adorable, flat-faced French Bulldog into your home:

When trained well and exercised thoroughly, the French Bulldog can be a great companion for the right person or family.