The Standard Schnauzer was the originator of the Giant and had been documented as far back as the 1400s. Schnauzers were first called wirehaired pinschers. A cross with gray wolfs and Black German Poodles gave them their distinctive salt and pepper, wiry coat. Later the dogs were named Schnauzer after the German word for muzzle.

Giant Schnauzers were first used as a superior cattle dog. Their breeding lines are unknown but it’s been suggested that Standard Schnauzers were bred with the Great Dane and the Bouvier des Flandres.  In Germany, Giant Schnauzers went from cattle dogs to butchers dogs to stockyard dogs and brewery guard dogs. Outside of Germany they remained largely unknown until World War I when they gained a reputation as police dogs. As their crime fighting reputation has grown more Giant Schnauzers have been imported into the U.S.

Giant Schnauzers were recognized by the American Kennel club in 1930. 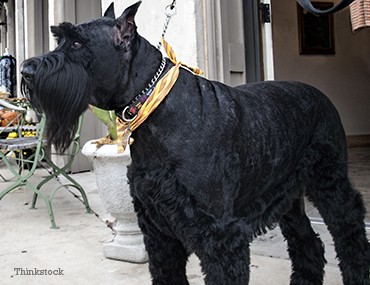 The Giant Schnauzer has been a working class dog and a guard dog. She would like to have jobs to do or tasks to perform and as a former guard dog she will watch carefully over the property. She’s intelligent and takes well to training but would prefer non repetitive tasks. Her working nature gives her plenty of energy to burn so if you live in an apartment it’s important that you walk her vigorously each day.

Giant Schnauzers are rarely trusting of strangers at first. In fact you’re likely to hear a low growl when somebody new comes to the door; fortunately, they’re smart enough to recognize a welcome guest and with your permission they will be friendly around company.

Giant Schnauzers love and need to be with their families. They’re a child friendly dog but can also easily overwhelm small children. Schnauzers are always entertaining and never lazy.

Conditions to watch for in the Schnauzer include the following: