The miniature pinscher is often mistaken as a mini version of the Doberman pinscher, but in fact he outdates that breed. He was first popularized in Germany and “pinscher,” means “toy,” in German. The blood lines of the miniature pincher are speculative. Similar dogs are seen in some artwork from the 1700’s but any written account of the breed dates back only about 200 years.  It’s thought that the pinscher might have been the offspring of the Dachshund and Italian greyhound, but we don’t know with any certainty.

What is certain is that the miniature pincher was used as a rat dog in Germany and in the surrounding regions. The pinscher enjoyed his popularity until World War I, but after that his numbers plummeted in Europe. Fortunately he was exported to America and saw a rise in numbers here just as he lost it there.

He’s sometimes referred to as the king of the toy dogs, He has a high stepping walk and all the dignity and boldness that comes with being a king. 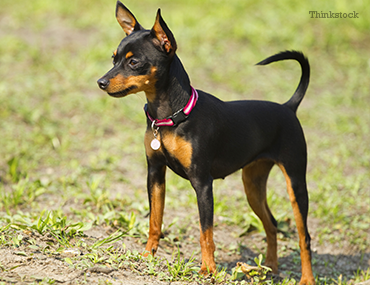 The miniature pinscher is one of the most energetic dogs in the world and can’t be recommended for novice pet owners. It can be very difficult to control his barking so it’s best you have some space between you and your neighbors. He’s also highly suspicious of strangers and has a strong will, all his own.

If you’re able to control his barking he would be a suitable apartment dog but needs daily exercise either inside or out. He doesn’t like the cold and would prefer to play inside on snowy days.

The miniature pinscher doesn’t know his own size and will aggressively pursue anything he deems a threat, even if it’s ten times his weight. He’s an alert watchdog and will guard his family at all costs. He is sometimes better with bigger kids than with children because he doesn’t like to be manhandled.

The miniature pinscher is territorial and very proud. He’s not a purse dog. He’ll try and prove his dominance and will destroy hard plastic toys.

The miniature pinscher is curious and funny and would make the right pet owner very proud.

Health:
There are certain conditions to watch out for in a miniature pinsher: