The Russell terrier originates in England but was developed in Australia. The line begins with Jack Russell, who was a student at Oxford University, and owned a terrier named Trump. Jack used Trump to breed a new kind of terrier who excelled at fox hunting. The Jack Russell was small enough to fit into a den or be carried in a backpack. He was a favorite of hunters on horseback.

Jack Russell refused to show his terriers, electing to use them exclusively as a hunting dog. After his death in 1883 other patrons of the breed followed his example. This led to controversy in 1998 when the Jack Russell was accepted into the American Kennel Club.

The PRTAA and JRTCA have different breed standards with those in the Jack Russell camp only interested in hunting ability.

The Russell terrier has remained a favorite among horse owners for more than a century. 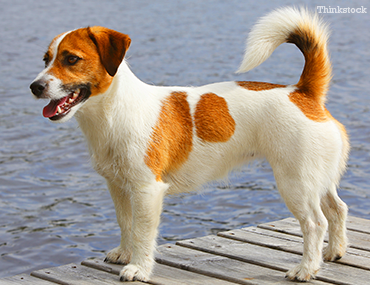 The Russell terrier is playful and has a great sense of humor. He’s also loyal for life.

The Russell terrier is a hunter. It’s what he’d most like to be doing. If there aren’t any foxes to be found, he’ll go after mice rats or even cats. He’ll chase his prey anywhere and through just about anything so you should have an enclosed yard that he can’t escape.

The Russell terrier is exceedingly smart, more cunning than your average fox for sure and very energetic. He’ll be easily bored if you don’t engage him on a regular basis. He needs to have lots of exercise. Depriving him of that will result in destructive behavior. We recommend several walks and vigorous playtime every day.

He’s easy to groom, a brush once per week should suffice.

There are several conditions to watch out for in the generally healthy Russell terrier breed: