The Newfoundland’s origins are only speculation. It could be a descendant of the Labrador, the Tibetan mastiff or the Great Pyrenees. The only thing we know for sure is that it originated on the Island of Newfoundland where he was used to pull carts, save sailors and children from the water and haul heavy nets.

The breed found exceptional prosperity in England until 1914 when the war decimated their numbers. Since then they have made a steady comeback. 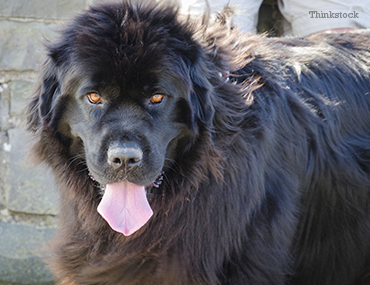 The Newfoundland is a very sweet and gentle dog. He has a calm temper and what’s more he’s a life saver!

The Newfoundland generally only shows aggression when he views something, or someone, as a threat. Even then he’s not likely to attack but to defend his ground.

He loves kids but because of his size you’ll need to be careful that he doesn’t knock them over or fall on them.

The Newfoundland requires a calm and even tempered trainer. He will be sensitive to tone of voice.

The Newfoundland should be walked with a pack of dogs if possible so that he can be well socialized.

He enjoys the outdoors but is not an outdoor dog. He’d like to sit in your lap and doesn’t always understand his own size. He’ll want to spend time with the family and should be walked a minimum of once per day.

The Newfoundland requires weekly if not daily grooming. He has a thick double coat which keeps him warm in the water. Baths should be avoided because they might wash essential oils from his fur.

Newfoundlands have a lengthy life expectancy for such a large dog. There are several conditions they might be more susceptible to: