A powerful and protective dog with a soft side
Dog Breeds

The Rottweiler breed gets its name from Rottwiel, Germany, where they were used to herd cattle in the Middle Ages. But their history is a lot older than that!

The Rottweiler actually ended up in Germany because of the ancient Romans. As their armies tried to conquer Europe, they brought thousands of cattle for food. Their Rottweilers were used as herding dogs and eventually spread around Europe before becoming a favorite of cattle herders who sold their stock in Germany.

When the railroad and the cattle car were invented, Rottweilers lost their jobs as herders and almost went extinct. Fortunately, the breed was kept alive because of their popularity as police and military dogs. By the 1990s, they were ranked the second most popular purebred in the United States. 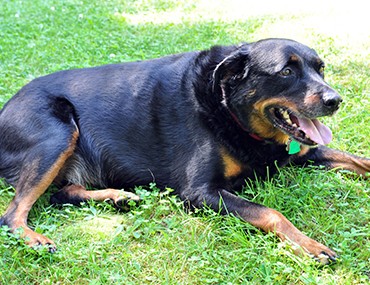 Rottweilers still have a lot of the physical traits that made them so popular cattle herders hundreds of years ago:

Rottweilers are tall, thick dogs, and are happiest when given an outlet for their energy such as a job to do or a lot of exercise. Naturally protective of their territory (and owners!), Rottweilers tend to have a watchful, “wait-and-see” attitude and are very smart. While they don’t always immediately warm to others and sometimes need to get used to people, they can also be really playful and goofy. Overall, they can make great companions and give a household a sense of security.

In general, the breed enjoys good health. The most common medical conditions to appear in Rottweilers include:

Rottweilers can be great companions! However, because of their size, strength, and natural herding instincts, you should know what you’re getting into.  Think of it this way: if you own a Rottweiler, you should be prepared to own and control a dog that’s a lot stronger than you. Here are some important things to think about:

Trained and socialized the right way, Rottweilers can be a great addition to many families and households.