The Tibetan Terrier isn’t actually a terrier at all and was named as such only because of his size. He is very much Tibetan though and lived with the monks in monasteries as far back as 2000 years ago. The Tibetan has always been a companion dog; although, he was occasionally used to help with the chores.

Tibetan Terriers were considered to be a good luck breed. They were never sold and only given as gifts. It was thought of as shameful to mistreat these dogs in any way and you would be considered cursed if you did.

They remained purebred for centuries as a result of their geographical location. The first Tibetan Terrier to make his way into Europe was given as a gift to Dr. A. Grieg after she performed a medical procedure in India. Dr. Grieg acquired a male Tibetan after that and began a breeding program. Her first dogs, born in 1924, were called Lhasa Terriers. Six years later the name was changed to Tibetan Terrier.

Tibetan Terriers entered the U.S. for the first time in 1956 and were recognized by the American Kennel Club in 1973. 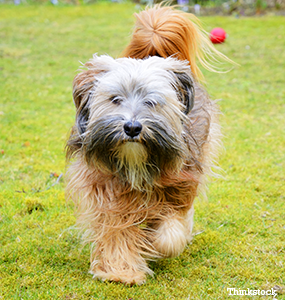 The Tibetan Terrier has a fantastic personality. He’s friendly eager and loving. He might be small but his energy level is big. The Tibetan will be looking for a walk every day and plenty of playtime. He’s great around kids and will offer them hours of entertainment.

He’s smart so you’ll need to be on your toes while training him. Always reward him for doing something right. Don’t ever scold him. New and creative games are the best way to keep him interested in training sessions. Tibetans are agile and can compete in agility or other dog sporting competitions.

Tibetan Terriers are very curious about the world around them. They can easily get lost while exploring so keep them safe either behind a fence, or on a leash.

Their thick long coats will require several brushings during the week.

The Tibetan is particularly susceptible to eye and joint issues. You should watch for any of the following: